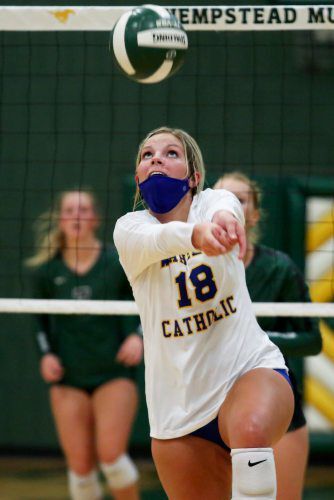 Dubuque Wahlert’s Lauryn Montgomery passes the ball during their match at Dubuque Hempstead on Sept. 10. 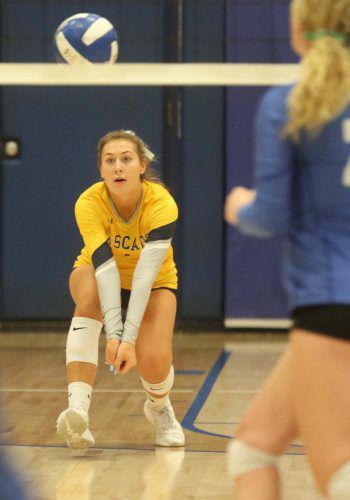 Cascade’s Brooke Denniston returns a hit during their game against Bellevue at Bellevue High on Sept. 29. 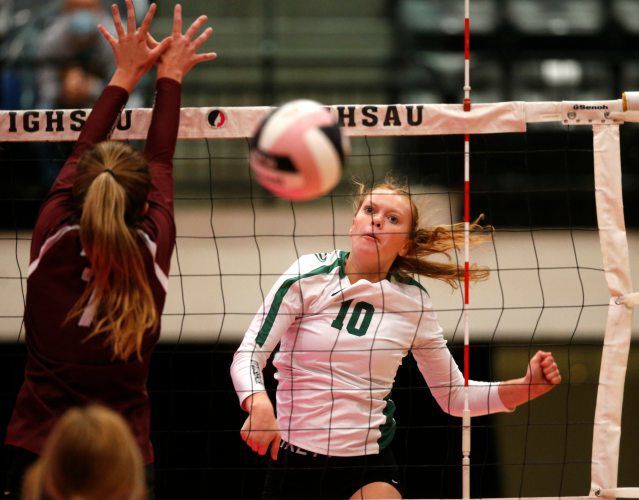 Dubuque Hempstead’s Ashley Glennon smashes the ball past the defense of West Des Moines Dowling during their Iowa Class 5A state quarterfinal in Cedar Rapids on Nov. 2.

Dubuque Wahlert’s Lauryn Montgomery passes the ball during their match at Dubuque Hempstead on Sept. 10.

Cascade’s Brooke Denniston returns a hit during their game against Bellevue at Bellevue High on Sept. 29.

Dubuque Hempstead’s Ashley Glennon smashes the ball past the defense of West Des Moines Dowling during their Iowa Class 5A state quarterfinal in Cedar Rapids on Nov. 2.

With the nation in the midst of the coronavirus pandemic, most Telegraph Herald area volleyball teams played their seasons, while others decided to hold off until spring.

In Iowa, all TH area teams took to the courts. Meanwhile, the Illinois High School Association opted to postpone the volleyball season until spring across the entire state.

The Wisconsin Interscholastic Athletic Association took the route of allowing schools to decide for themselves if they wanted to play in the fall or wait until spring. Most TH area teams competed in the fall, while local schools Cuba City, Fennimore and Southwestern opted to play this coming spring.

In a season full of unpredictability, here are the standout players that shined throughout the adversity and earned their spot on the TH All-Area second and third teams, along with honorable mentions.

Meredith Bahl (Western Dubuque, Jr., Outside Hitter) — The Class 4A all-state honorable mention, Northeast all-district team and all-Mississippi Valley Conference first team pick surpassed 500 career kills this season for the Bobcats, finishing third on the team with 201 kills. Bahl added 158 digs and 11 blocks as the Bobcats returned to the state tournament and reached the semifinals.

Maddie Harris (Western Dubuque, Jr., Outside Hitter) — Another key piece in the Bobcats’ run to the state semifinals, Harris also passed 500 career kills during another strong season. She was an all-MVC second team selection, delivering 247 kills (second on the team) and 203 digs (third for WD). She also added 22 ace serves and 19 blocks.

Maddie Cooley (Platteville, Sr., Outside Hitter) — Tabbed as an all-Southwest Wisconsin Conference first teamer, she received Wisconsin Division 2 all-state honorable mention. Cooley was pivotal in the Hillmen returning to the state tournament, and led the team with 28 ace serves. She also racked up 152 kills, 55 digs, 36 blocks and 27 assists.

Lauryn Montgomery (Dubuque Wahlert, Sr., Setter) — She was the floor general and senior leader for a young Golden Eagles team that had many downs during the regular season but rallied in clutch Wahlert fashion and reached the regional final. An all-MVC second team pick, Montgomery delivered 470 assists with 102 digs and 17 ace serves.

Carlee Smith (West Delaware, Jr., Setter) — As a Class 4A all-state honorable mention, Northeast all-district and all-WaMaC second team selection, Smith shined at state and earned a spot on the Class 4A all-tournament team as the Hawks finished as state runners-up. She provided 1,002 assists to go along with 172 digs and 35 ace serves.

Olivia Hogan (Dyersville Beckman, Jr., Libero) — The Class 2A all-state honorable mention, Northeast all-district pick and unanimous all-WaMaC first teamer was the engine that made the Trailblazers’ defense go in another terrific campaign. The defensive dynamo had 429 digs, but also chipped in 57 assists and 21 ace serves.

Ella Koloc (West Delaware, Jr., Libero) — Another instrumental player in the Hawks’ state runner-up finish, Koloc received Class 4A first team all-state and Northeast all-district honors to go along with being a unanimous all-WaMaC first team pick. She keyed the Hawks with 436 digs while adding 69 assists and 29 ace serves.

Brooke Denniston (Cascade, Sr., Defensive Specialist) — As a Class 2A Northeast all-district and River Valley Conference elite team selection, Denniston was all over the floor for the Cougars. She led the team with 285 digs, but also had 32 ace serves and was pivotal in keeping plays alive during a 17-8 season for Cascade.

Ashley Glennon (Dubuque Hempstead, Jr., Outside Hitter) — While many teams focused on Corinne Meier — and for good reason — Glennon provided a key second hitter that teams had to worry about in the Mustangs’ return to state. An all-MVC second team pick, she was second on the team with 189 kills but also chipped in 308 digs (third on the team), a team-best 45 ace serves and 33 blocks.

Emerson Whittenbaugh (Maquoketa Valley, Sr., Outside Hitter) — The Class 2A all-state third teamer, Tri-Rivers Conference West Division Player of the Year and 2A Northeast all-district pick was a force for the Wildcats. Whittenbaugh led the way with 423 kills, but also fronted the team with 40 blocks and 31 ace serves. She finished second on the team with 393 digs.

Kelsey Hansel (Edgewood-Colesburg, Jr., Outside Hitter) — The Class 1A Northeast all-district selection and unanimous Tri-Rivers Conference West Division first teamer did a little of everything for the Vikings. Hansel led the team with 262 kills and 253 digs, but also finished second in blocks with 17 and third in ace serves with 15.

Madison Devlin (Platteville, Sr., Outside Hitter) — While earning all-SWC second team honors, Devlin shined on the state stage in helping the Hillmen return to the state tournament and earned a spot on the Division 2 all-tournament team. She led the team with 181 digs, but also provided 117 kills, 23 ace serves, 10 assists and eight blocks.

Layla Alt (Shullsburg, Sr., Setter) — The first team all-Six Rivers West Conference selection and Wisconsin Division 4 all-state honorable mention pick was huge for the 11-2 Miners. Alt led the way with 188 assists, but was also second on the team with 19 ace serves and third on the squad with 112 digs, 101 kills and 13 blocks.

Elise Kilburg (Bellevue Marquette, Soph., Libero) — As a Tri-Rivers Conference East Division second team selection, Kilburg had a lot of big hitters coming at her this season but still thrived. She led the Mohawks with 267 digs, but also contributed 14 ace serves. Her ability to hit the floor and keep balls alive was crucial in any success Marquette found this season.

Kendell Esser (River Ridge, Sr., Defensive Specialist) — With a team-high 144 kills this season, Esser was a terror at the net for the Timberwolves in earning all-Six Rivers West first team and Wisconsin Division 4 all-state honorable mention. She also chipped in 160 digs and 11 ace serves.