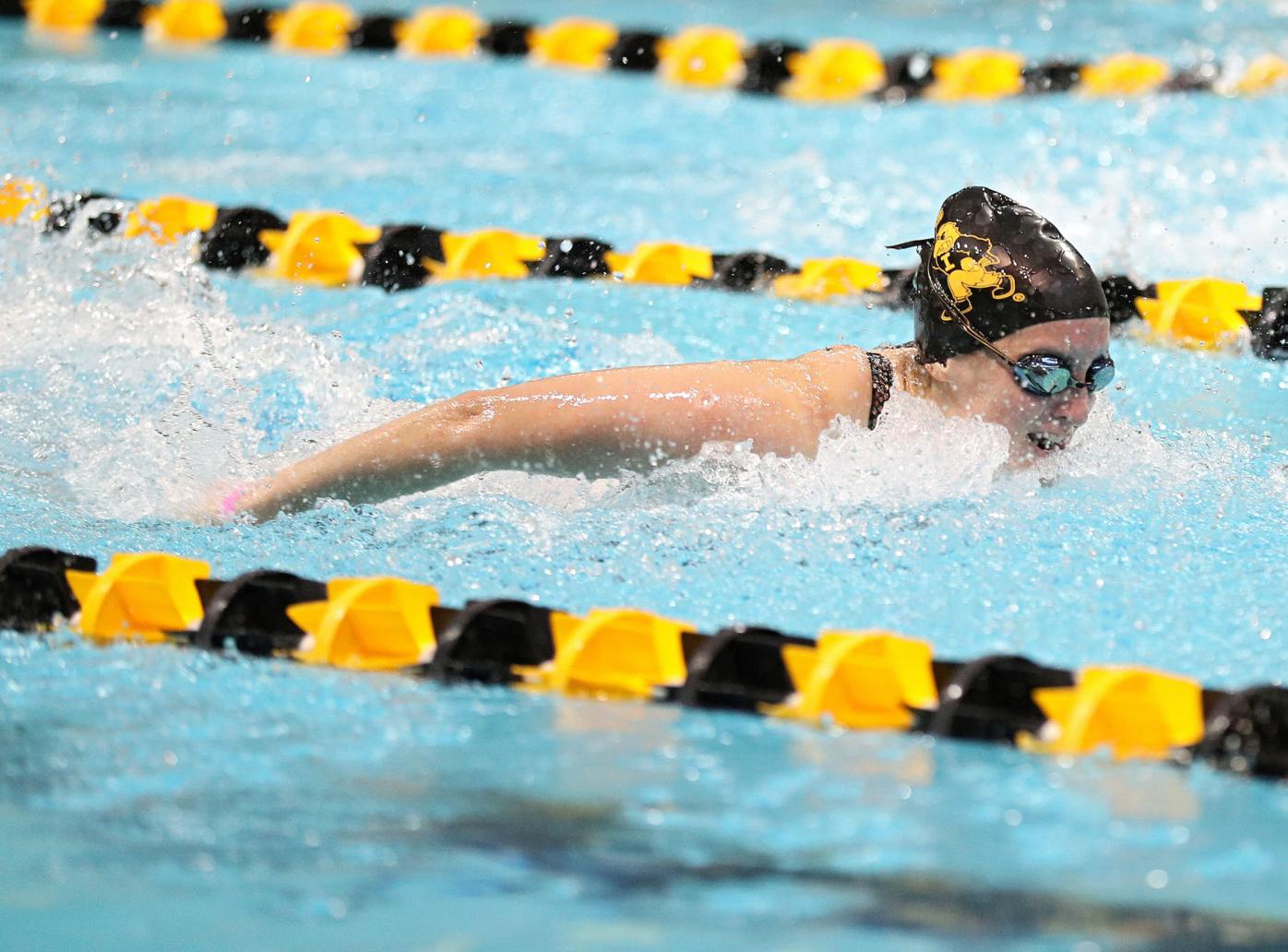 Iowa’s Anna Pfeiffer swims in the women’s 100 yard butterfly event during the Black and Gold Intrasquad in Iowa City in late October. The Western Dubuque grad will swim at Missouri State after Iowa dropped its program. 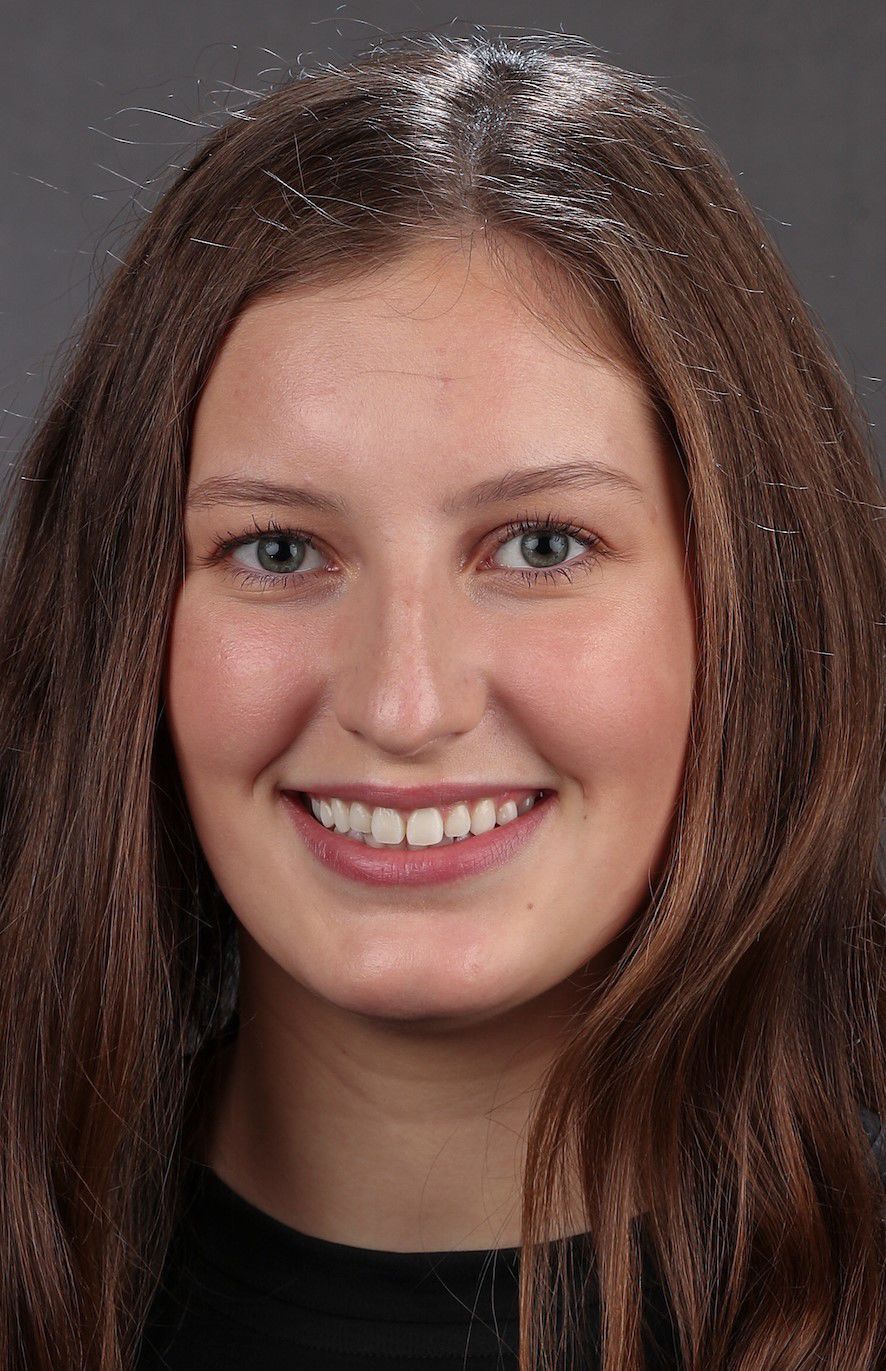 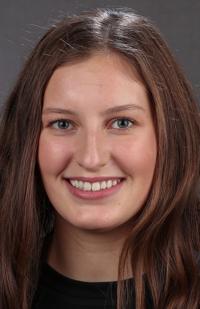 Anna Pfeiffer couldn’t have been happier with the first few days of her college experience, even if it came in the midst of a pandemic.

Then came the University of Iowa swimming program’s version of Black Friday.

“That was literally the best week of my life,” said Pfeiffer, a freshman backstroke/freestyler who graduated from Western Dubuque High School and earned all-state accolades while competing for Dubuque Senior. “All of us freshmen got so close that first week. Then, like four days after we got here … I don’t want to sound too dramatic, but it was like the worst day of my life.”

In August, Iowa athletic director Gary Barta announced the school would be dropping men’s and women’s swimming, men’s gymnastics and men’s tennis at the end of the 2020-21 school year in a measure designed to offset the loss of football revenue brought on by the coronavirus pandemic. At the time Barta anticipated an athletic department deficit of as much as $75 million for the fiscal year.

Administrators called the athletes from the impacted sports to a quickly arranged meeting on a Friday morning.

“We had no idea what was going on,” Pfeiffer said, her voice cracking. “We saw it was us, men’s gymnastics and men’s tennis, and we wondered, ‘What do we have in common with them?’ When we got in, our coaches weren’t looking very excited to be there. It was really quiet. We sat down, Gary came in and talked for two minutes, he left and the other administrators had to answer our questions. That was it. It wasn’t fun.

As the first semester progressed, time began to heal the wound. Then, in late October, Michigan State announced plans to discontinue its program, and that ripped the scab right off.

“When Coach Marc (Long) told us about Michigan State and how they had cut their program, and how they were in a meeting like us, it was like PTSD,” Pfeiffer said. “It was not good. Even though it was two months after it happened to us, it felt like I was right back in that gym and going through those emotions all over again.”

The Hawkeyes began practice shortly after Labor Day in anticipation of a last season that has been delayed by the pandemic and will finally open Jan. 16 against Wisconsin. They will swim six duals before the Big Ten championships on Feb. 24-27 at Purdue.

“We had no clue if we’d have meets at all, so it feels good now to know that we have something,” Pfeiffer said.

A lawsuit to reinstate the program has gained traction in recent months, but plenty of damage has already been done. Several swimmers, including Pfeiffer, entered the NCAA’s transfer portal.

Pfeiffer will swim for the Hawkeyes this season, then plans to transfer to Missouri Valley Conference powerhouse Missouri State next season. She still has the option to return to Iowa, if it reinstates the program, and will have four years of eligibility with the Bears, because the NCAA will not count 2020-21 against an athlete’s eligibility.

“It’d be a hard decision, because a lot of the girls have already left and some of the coaches have left, like Coach Sarah (Stockwell-Greyson), who was the one who recruited me,” Pfeiffer said. “Missouri State made me a really good offer, so it would have to match up to it. On the other hand, Iowa is closer to home, which is a big plus.”

Pfeiffer arrived in Iowa City with a stellar resume that included two Mississippi Valley Conference athlete of the year awards and two regional athlete of the year awards. She earned team MVP honors all four years and holds school records in 100 free, 200 free, 100 back and as part of the 200-medley relay. Pfeiffer qualified for state all four years, finishing as high as third while making seven podium trips.

After beginning with her dream college, she found it awkward to re-open the recruiting process.

“It’s hard to train, not knowing what’s to come or where you’re going to go,” she said. “I thought about every option, including being done with swimming, and that was really hard. Missouri State came up, and it seemed like the perfect fit. Now I’m really excited to know where I’m going and what they have in store for me. I can work really hard here and get better here for when I get down there.”

Pfeiffer also considered Utah, Kentucky and Northern Iowa, but found there weren’t a lot of spots or scholarship money for athletes in her graduating class. Fortunately, her teammates and coaches at Iowa supported her and helped in the process.

“They’ve been awesome,” Pfeiffer said. “Coach Sarah left to go to Indiana, but she was great in helping me out on the financial aspects of it. Coach Brian (Schrader), our sprints coach, is really good friends with the Missouri State coaches, so he was giving me good words for them. The things he was saying made me very excited to talk to them.

“Every time we get on the pool deck, the coaches are there with a smiling face. They say that the pool is a safe space. We don’t want to talk about what’s going on outside of it. That’s all negative stuff. It’s a safe, positive space. And they’re reminding us that right now we have the opportunity to get better every day in this great pool, and not a lot of schools in the Big Ten have this opportunity. They’re great.”

“They definitely are the team to beat and I’m excited to go to a program that has had so much success,” she said. “When I was talking to them, they talked a lot about academic support, and it sounds very similar to what I have at Iowa, so I’m really excited about that.