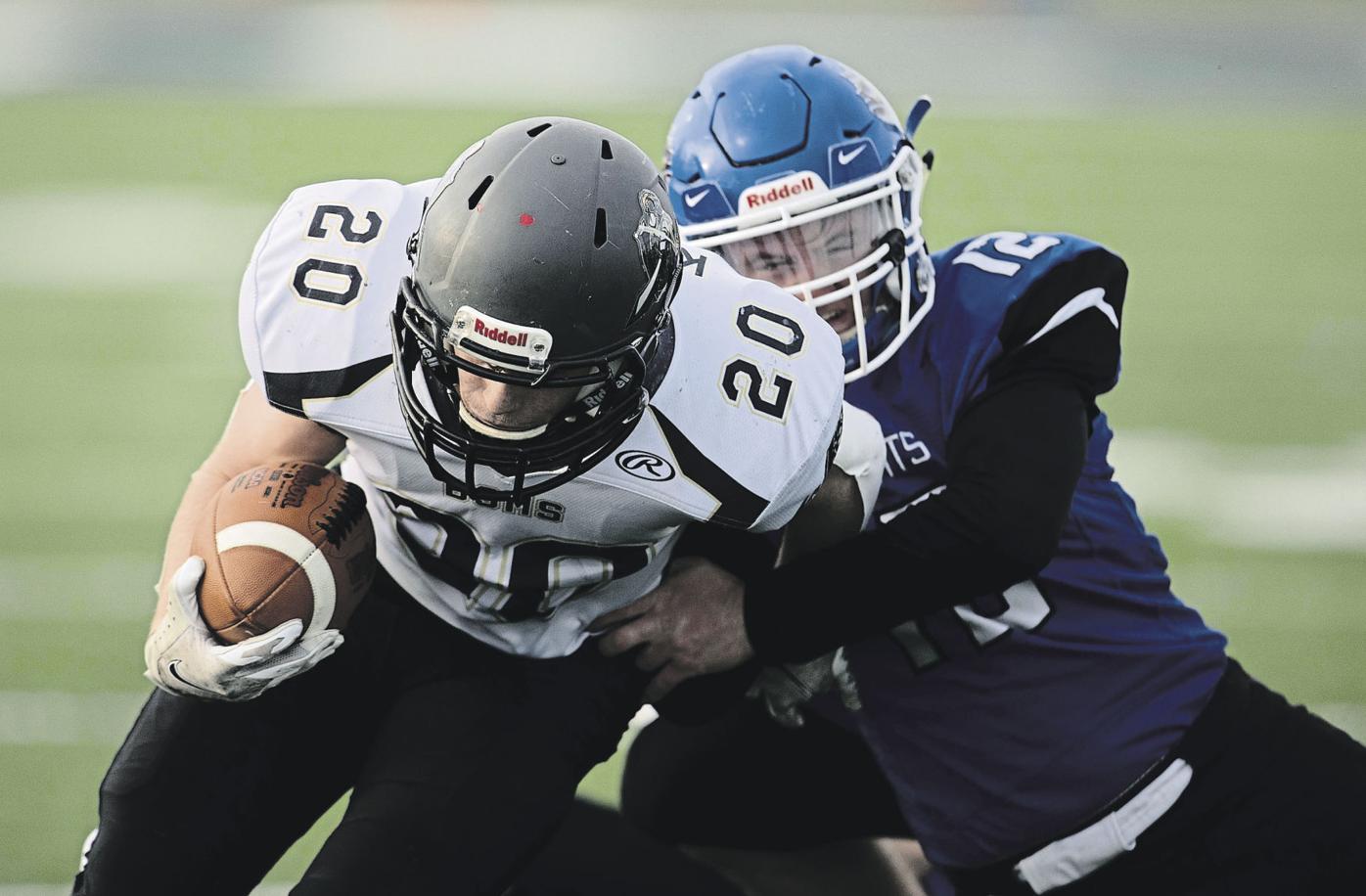 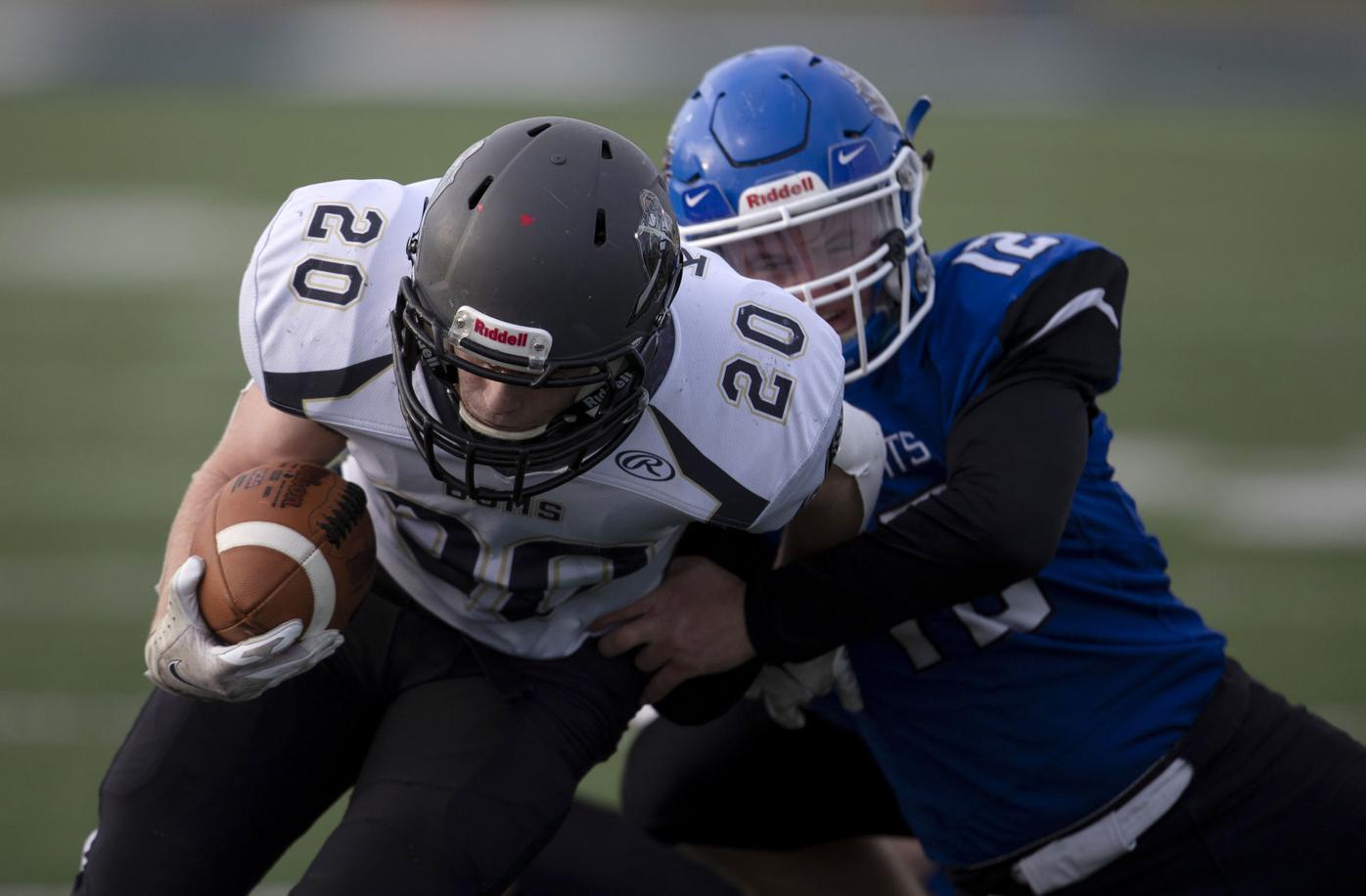 BSMS #20 Ben Beau is tackled by Southwester's #12 Peerson Kephart during their matchup at L.B. Carns Field in Hazel Green, Wis. on Friday, April 30, 2021. 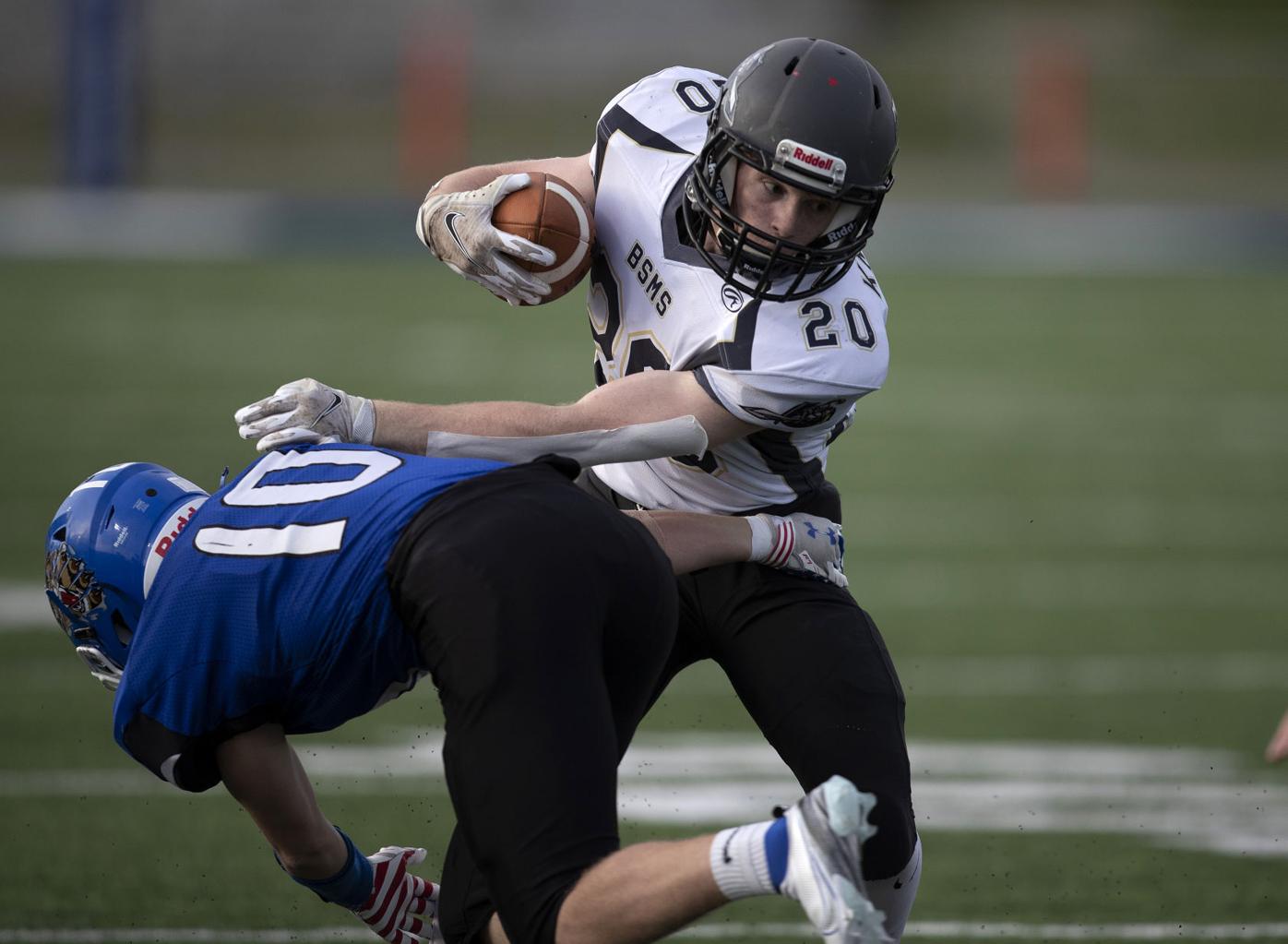 BSMS #20 Ben Beau is tackled by Southwester's #12 Peerson Kephart during their matchup at L.B. Carns Field in Hazel Green, Wis. on Friday, April 30, 2021.

HAZEL GREEN, Wis. — It was the final time putting on the pads in this crazy alternate spring football schedule.

Why not give the fans every reason to cheer?

Benton/Scales Mound/Shullsburg and Southwestern did exactly that in an explosive first half Friday night at L.B Carns Field. In the end, B/SM/S outslugged Southwestern, 56-20, in an offensive showdown.

Coming off a record-setting week with eight touchdown passes, Southwestern quarterback Peerson Kephart did not miss a beat in the first 24 minutes, finishing the first half with 255 yards passing.

The first 99 of those came in dramatic fashion.

After a beautiful punt pinned the Wildcats at their own 1-yard line, Kephart wasted no time in flashing his big arm as he connected with Ray Runde on a 99-yard scoring pass at 8:46 of the first quarter to take an early lead, 6-0.

Southwestern looked to add on after Corbin Splinter recovered a B/SM/S fumble for in the red zone, but Kephart’s ensuing pass was tipped and intercepted in the end zone by the Knights’ Caleb Ward to tie the score. After the two-point conversion, the Knights had the lead, 8-6.

Things were just getting started.

Kephart kept slinging it with a 31-yard connection to Colson Splinter on the next drive. Five plays and 63 yards later, the Wildcats recaptured the lead, 12-8, at 4:05 of the first quarter.

Hoppman got loose for a 28-yard run on the Knights’ next possession and Ben Beau added 26 yards of his own. Three plays later, Beau took it home from the 3-yard line as B/SM/S surged ahead, 14-12.

Kephart found Colson Splinter for a 61-yard gain on Southwestern’s next drive to catapult a five-play scoring drive that took just over two minutes, as the Wildcats snagged the lead back, 20-14.

Yes, this was all in the first quarter.

“They have athletes all over the field,”, B/SM/S head coach Todd Bastian said. “They have good kids; they have a quarterback that throws a BB. We knew that they were going to put points on the board; you are not gonna shut that down.”

The Wildcats may have won the first 12 minutes, but the rest of the way belonged to the Knights.

B/SM/S used an 11-play, 64-yard drive to open the second quarter with a heavy dosage of solid gains by Hoppman, capped off by his 8-yard score.

“Just like in life, it’s how you respond,” Hoppman said. “I let an 80-yard touchdown go towards the beginning of the game and we had a good talk and kicked it into gear.”

After forcing a turnover on downs, B/SM/S turned to a little trickery to extend its lead.

On the third play, with 3:53 remaining in the half, quarterback Jacob Duerr pitched to Hoppman, who threw a beautiful halfback pass to Dominick Cummins for a 58-yard score and a 30-20 lead.

Hoppman wasn’t done. Not even close.

He was the beneficiary of a gift interception off the receiver’s hands on the next drive, which set up yet another Knights score.

Hoppman said that was the turning point of the night.

“That gave us the spark we needed and there was no looking back at that point,” Hoppman said. “We just ran and ran and ran after that.”

Duerr found Beau in stride for a 56-yard touchdown score for a 38-20 lead and an exclamation mark on an exhilarating, exhausting first-half of play.

B/SM/S kept pouring it on to start the third as Hoppman got loose for a 44-yard run and punched it home on the next play from the 2-yard line.

His running mate, Beau, later added his third TD of the night on a 77-yard rushing score, and just for good measure Hoppman put the finishing touches on the night with a 51-yard scoring reception from Duerr.