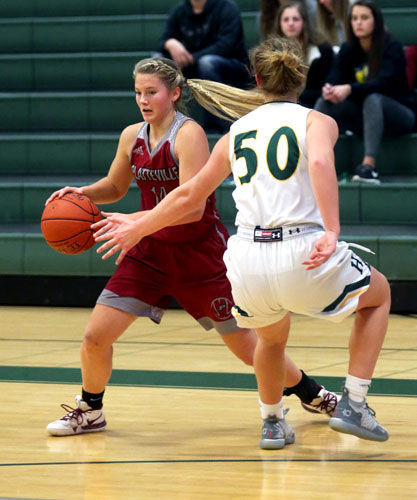 Platteville's Josie Nies drives to the basket during a basketball game against Dubuque Hempstead in Dubuque on Nov. 26. 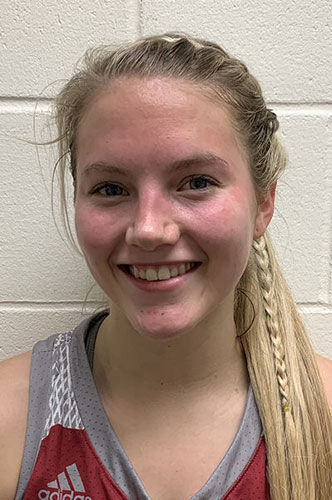 Josie Nies is on a mission in her final season as a member of the Platteville Hillmen girls basketball team.

The four-year starting point guard and her teammates have made it to the sectional semifinal or final each of the past three years before being denied a trip to Green Bay. This week’s Telegraph Herald Athlete of the Week is doing everything in her power to help the Wisconsin Division 3 top-ranked Hillmen avenge those devastating losses and finally punch their ticket to the Resch Center.

“This group of seniors has been playing together since the fifth grade,” Nies said. “We have amazing chemistry on the court, and we know this is the last go around. We won’t be satisfied unless we get that trip to state.”

Nies is averaging 14 points per game to go along with 5.8 assists. During the Hillmen’s 57-42 win over Division 1 Waukesha West, she scored 19 points and added five assists, three rebounds and two steals.

“Josie is the type of athlete who is always willing to step up to any given challenge,” Platteville coach Mike Foley said. “She is a tremendous leader who gives her all on every possession.”

“The past two games Josie has just been phenomenal, both offensively and defensively,” Foley said. “She loves the game, and knows the game very well. You can see that she has put in a great deal of time and work over the offseason.”

During Thursday’s win over Division 3 No. 8 Prairie du Chien, Nies took on the role of defending the Hawks’ best player, Lily Krahn.

“I have really been proud of how my defense has improved over the past couple years,” Nies said. “I want to be out there guarding their best player. I want that responsibility on me.”

Nies finished the game with 11 points, six assists and eight rebounds, while holding Krahn scoreless in the final 10 minutes of the game.

Nies, who has been playing AAU basketball since the fifth grade, said basketball has always been a big part of her life.

“I just grew up around the game and fell in love with it,” she said. “My dad coached some of our teams, and my sister and I did workouts with him every day during the summer. My brother Brayden is playing for UW-Platteville. It’s just something our family loves.”

Josie’s younger sister, Camryn, is a freshman on this year’s Hillmen team.

“It was a goal of hers to make varsity as a freshman, and I am so proud to have her out there with me,” she said. “We have a great connection when we’re on the court together, and it’s just been an experience I’m really thankful for.”

Nies said she plans to continue playing basketball next fall, but is undecided as to what school she will be attending.

“I know I want to keep playing, but for now I’m just soaking in every game I have left here,” she said.