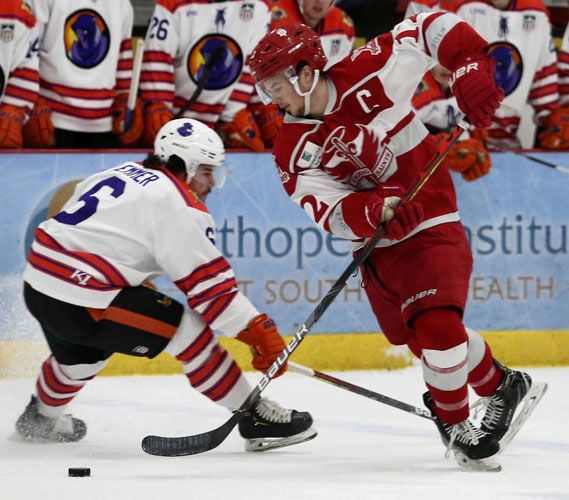 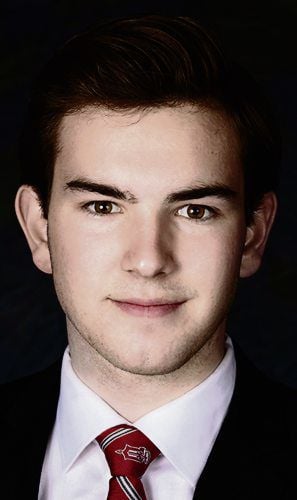 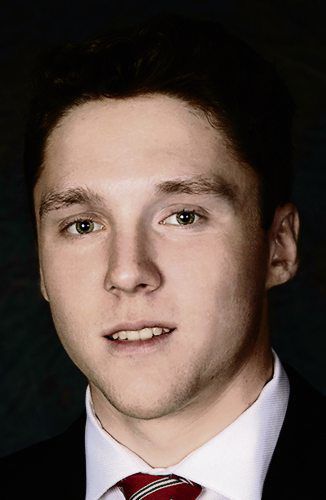 Riese Gaber cares more about the wins than his own personal statistics. Stretching his lead atop the USHL goal scoring chart this weekend came as an added bonus.

Gaber scored three goals this weekend in a pair of Dubuque Fighting Saints victories over Youngstown to raise his season total to 27. He has four more than the Phantoms’ Trevor Kuntar, who managed just four shots but no goals in two games in Dubuque this weekend.

“It’s kind of my job to provide offense and score goals, so I have to make sure I’m doing that every night,” Gaber said after scoring twice in a 6-0 victory Saturday night. “I wasn’t worried about (Kuntar) being on the other bench this weekend. I was focused on me and doing what I could to help our team win.

“My mentality is just focused on working hard, and the rest will come. Fortunately, I had a good weekend, but more importantly the team won.”

Erik Portillo punctuated Saturday’s win with his first USHL shutout as the Saints improved to 27-9-1 and stayed six points behind Eastern Conference-leading Chicago (30-7-1).

Portillo stopped all 16 shots he faced to improve to 17-4-1, lower his USHL-best goals against average to 1.94 and improve on his league-leading .922 save percentage. The Buffalo Sabres prospect has allowed only one goal on 12 different occasions this season.

“It feels good,” Portillo said. “I’ve had a few one-goal games, so it was nice to finally get the shutout. It’s nice to get one, but, ultimately, it’s about the team. The team gave a really good effort to keep their shots down. What’s important is we did it as a group.”

The line of Stephen Halliday centering left wing Ryan Beck and Gaber combined for five goals and 13 points this weekend. Gaber finished with five points, while Halliday and Beck each tallied a goal and four points.

“Because we have so much depth on this team, it’s almost a little easier on everyone,” Halliday said. “We’re not relying on one guy to score. It’s a pretty diverse lineup.

“Youngstown likes to play a physical game, and we knew penalties were going to be a factor. We did a good job of not straying from our game plan and controlling the flow of the game.”

After a scoreless first period, the Saints struck twice in the first 4:56 of the second frame to take control Saturday night.

Antonio Venuto opened the scoring with his 11th of the season at 2:05. Jimmy Glynn made a pass along the left-wing boards to Venuto, who skated in on goalie Dominic Basse and wired a shot into the upper left-hand corner of the net.

Gaber made it 2-0 with a beautiful deflection of a Beck centering pass. Halliday picked up a secondary assist on the play.

Dylan Jackson’s 17th goal of the season stretched the lead to 3-0 at the 13:10 mark. Ty Jackson and Braden Doyle moved the puck along the blue line before Dylan Jackson snapped a wrist shot into the top left corner of the net for a power play goal. Ty Jackson, the USHL’s leading point producer, extended his point scoring streak to eight games on the play.

Gaber tapped a backhander into an open net at 5:50 of the third period to make it 4-0 after Basse stopped shots by Halliday and Michael Feenstra.

Beck scored perhaps the prettiest goal of the season at 12:43 to make it 5-0 after Halliday threw the puck to an open area in front of the net. Beck caught it, spun around and hoisted a forehand shot over Basse for his fifth goal of the season.

“That was the nastiest goal I’ve seen in my life,” said Halliday, who stood on the ice with his hands on his head for a few seconds after the goal. “I was in shock for the rest of the game.”

Tommy Middleton wrapped up the scoring less than five minutes later with his second in as many nights. Aidan Fulp’s shot went over the net, but Middleton tapped in the rebound for his fourth of the season. Dylan Jackson also assisted.

Dubuque won, 4-1, on Friday night. The Saints take a four-game winning streak into a Tuesday night tilt at Waterloo.