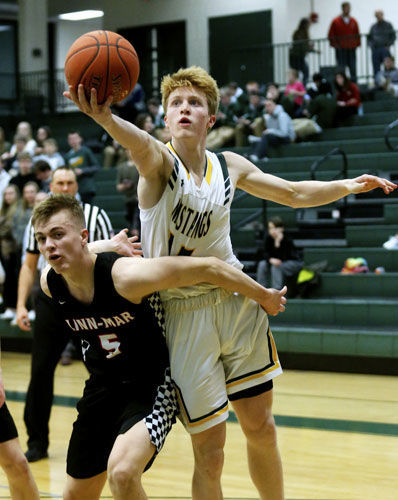 Dubuque Hempstead’s Michael Duax (right) became the first in the Class of 2021 to commit to Northern Iowa on Tuesday night. Duax is the youngest of five brothers, all of whom have committed to play college basketball. 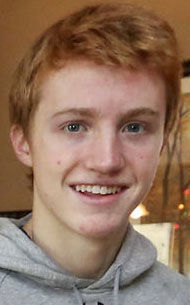 Northern Iowa has roped in another Dubuque County standout.

Dubuque Hempstead’s Michael Duax announced through Twitter late Tuesday night that he has committed to play NCAA Division I basketball for the Panthers. Duax, a 6-foot-5 junior forward for the Mustangs, tweeted a picture of himself in a UNI uniform with the caption: “Excited to share that I have committed to the University of Northern Iowa!! Go Panthers…” He is the first recruit in the 2021 class to commit to UNI.

The youngest of five brothers, Duax said he took fair share of lumps from siblings during pickup games in the driveway and the gym.

It all paid off.

“Playing one on one outside on the basketball court outside, or even going to the gym and practicing they would never take it easy on me,” said Duax. “There’s growing up and playing. Even if I was losing all the time, they would just tell me to get through it.”

All five Duax brothers have committed to play college basketball. Oldest brother Robert played four seasons for UW-Platteville and was named the 2018 WIAC player of the year. Second oldest Connor was a member of the 2019 NCAA Division III champion UW-Oshkosh, while middle child Lucas and second-youngest Max both currently play Division II at Upper Iowa University.

Hempstead coach Curt Deutsch, who coached all five Duaxes, said it’s no surprise that the youngest of the bunch was hardened up enough to play at the D-I level.

“You can definitely tell that he’s the youngest of five and been beaten up by his brothers,” Deutsch said, adding that Duax received “multiple offers” besides UNI. “He’s used that to round into a tough competitor. He just hates to lose and that’s been developed by his older brothers and all those pickup games they’ve played.”

Duax is the top scorer for a 13-5 Hempstead team that has been a mainstay in the Iowa Class 4A Associated Press rankings this season. He leads the Mustangs in points per game (20.7), field goals made (145), rebounds (153), assists (56) and blocks (19) while shooting 49.7 percent with 34 steals. Hempstead is ranked tied for 10th in the latest poll.

Northern Iowa has been on Duax’s trail for quite a while. Panthers coach Ben Jacobson offered him a scholarship last March shortly after his sophomore campaign. Jacobson and assistant coach P.J. Hogan (a Dubuque native, Hempstead grad and former teammate of Deutsch) have attended several Mustang games this season, including last Friday’s contest at Waterloo West.

A day later, Duax attended UNI’s sellout home game against Drake, which the Panthers won, 83-73. He said he decided, then, that UNI was the place for him.

“Just watching that game, it just hit me that this was the place I wanted to go,” Duax said. “Every single day (since then) I keep getting more and more excited. … That’s just a place where I could see myself, playing with those players.

“Throughout this whole process I’ve known in the back of my mind, that UNI’s been there for me all along.”

This continues a string of Tri-State area recruits that Jacobson has locked in. Currently on the Panthers roster are redshirt seniors Luke McDonnell (Dubuque Senior) and Spencer Haldeman (Western Dubuque), true freshman Noah Carter (Senior) and Derek Krogmann (West Delaware) who is redshirting in his first season at UNI.

That familiarity also was a selling point for Duax, who played against Carter during intracity tilts last winter and was part of the same AAU program as Krogmann (Martin Brothers).

“I’ve always been comfortable with players,” Duax said. “Even the other players that aren’t from the area, playing open gyms (at UNI) with the guys on the visits, I got to know them and felt comfortable.”

The Mustangs have three games left in the regular season: Friday at rival Wahlert, home Tuesday vs. No. 2 Cedar Falls and on the road on Feb. 20 vs. Iowa City High.

Now that his college commitment is out of the way, Duax said he’s looking forward to making the most of what’s left of his prep career.