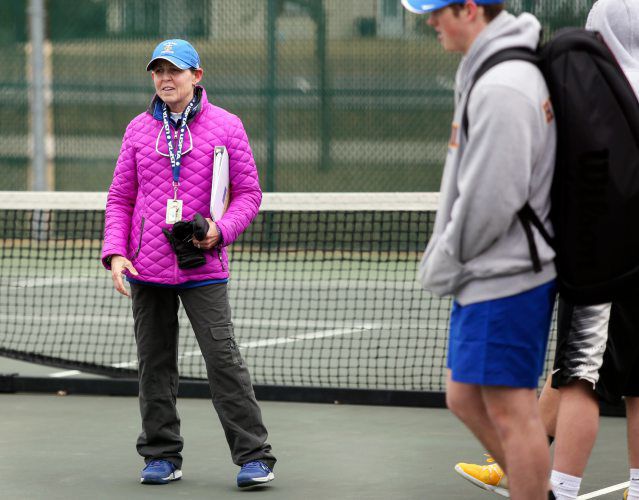 Dubuque Wahlert head tennis coach Julie Westercamp talks to her players before a match on April 10, 2018, in Dubuque. Westercamp passed away on Wednesday morning following a three-year battle with cancer. 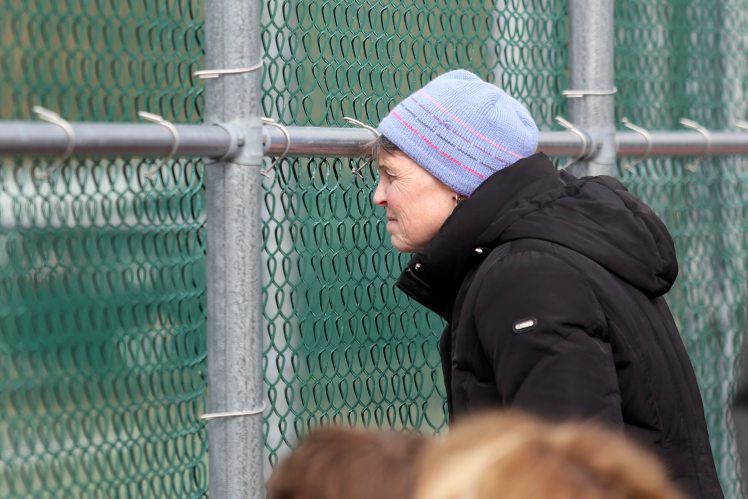 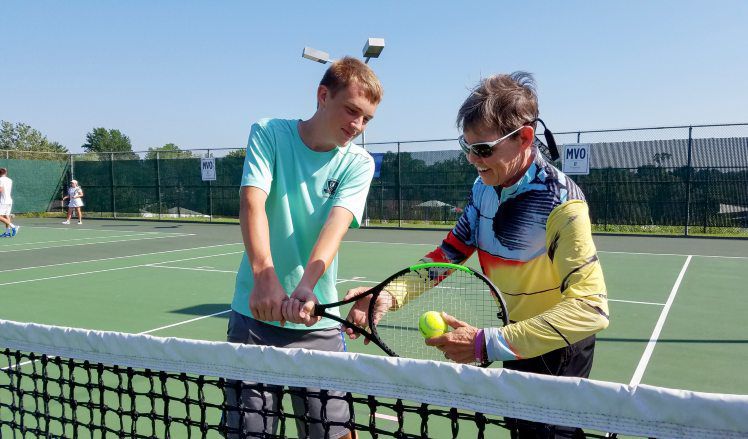 Julie Westercamp (right), tennis director at the Dubuque Golf & Country Club, works on a drill with one of her workers, Grant McDonald, between matches at the Mississippi Valley Open last summer. 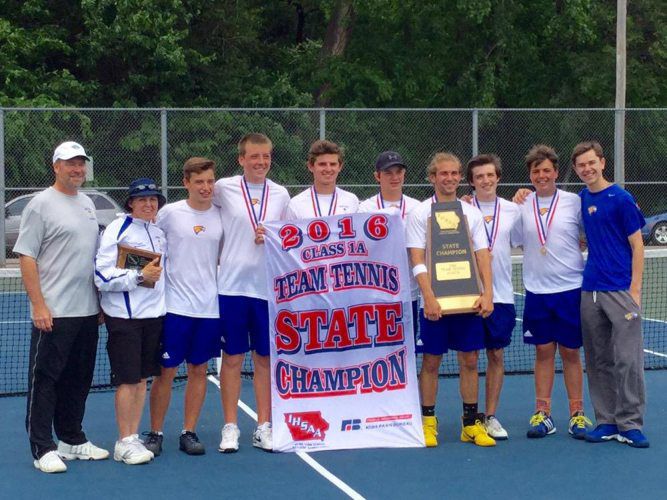 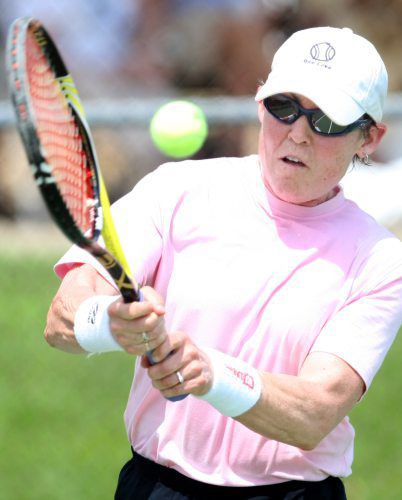 Julie Westercamp returns a hit in a match against Penny Gilloon and Sara Loetscher during the Mississippi Valley Open tennis tournament Sunday, July 24, 2011, at the Dubuque Golf and Country Club.

Dubuque Wahlert head tennis coach Julie Westercamp talks to her players before a match on April 10, 2018, in Dubuque. Westercamp passed away on Wednesday morning following a three-year battle with cancer.

Julie Westercamp (right), tennis director at the Dubuque Golf & Country Club, works on a drill with one of her workers, Grant McDonald, between matches at the Mississippi Valley Open last summer.

Julie Westercamp returns a hit in a match against Penny Gilloon and Sara Loetscher during the Mississippi Valley Open tennis tournament Sunday, July 24, 2011, at the Dubuque Golf and Country Club.

Julie Westercamp was an inspiration.

Dubuque Wahlert's boys tennis coach and a staple of the Dubuque tennis community died this morning at her Dubuque home surrounded by family after a three-year fight with cancer.

“There’s moments in your life that you’ll always remember, and when I think of the relationship Julie had with the boys and our team, that made it truly special,” said Wahlert assistant coach Eric Lucy. “Julie said many times that those years were some of the most enjoyable years of her life. She had so much fun with those boys. She couldn’t wait to get to practice and couldn’t wait for the meets. Even in the offseason, you could see the excitement and glimmer in her eye.

“She always had that infectious smile and positive attitude and cared more about others. We were all blessed to have her in our lives and should be modeling those same traits in our daily lives.”

Westercamp, 64, made a splash in her first year as coach at Wahlert in 2016, leading the Golden Eagles to a record-tying ninth state championship. In February 2017, she was diagnosed with stage 3 pancreatic cancer, and friends, family and former students donated more than $45,000 through an online fundraising campaign to help with medical costs.

In October 2017, Westercamp underwent a whipple procedure that helped her overcome her diagnosis. After a one-year hiatus, she returned to her coaching post. In June 2018, she led the Golden Eagles to a record 10th boys tennis state championship.

“I started working with her after freshman year, and after a drill, she pulled me aside and said we had the chance to really do something special,” said Riley Collins, a 2018 Wahlert grad that played under Westercamp and is now a sophomore starring for Loras College. “I really took that to heart because she didn’t even have the job yet. She ended up taking it, and we won it all that year.

“Working at the country club with her, I’d have the 6 a.m. shift and she was out there doing drills and teaching at 6 a.m. the same way she would for a 12 p.m. lesson. I’m definitely a different beast at 6 a.m., and I was always inspired by that.”

Over the past year, Westercamp returned to University of Wisconsin Hospital and Clinics in Madison for chemotherapy treatment, tending to cancer spots on her lungs and liver. However, late last year the doctors informed her there was nothing else they could do, as the cancer had become too aggressive.

Earlier this month, Westercamp traveled to Maryland for screenings at National Institutes of Health and received approval for a trial in which doctors took Westercamp's T cells out of her blood and genetically altered them. They then put the cells back in and hoped those would fight the cancer, but she turned for the worse in recent weeks.

“She was always asking people about them and their family,” Lucy said. "Always interested in others. Coming off the state championship in 2016, we were ready to go in 2017, and that hit everybody hard. But she was just so amazing that entire time. We all said it so many times that if you didn’t know she had cancer, you wouldn’t know she had cancer. She always had a positive attitude and continued to care more about others than herself.

“I just know in my heart that anyone that ever had contact with Julie -- friends, family, students -- that she truly touched their lives.”

In January, Westercamp received the boys tennis 2018-19 Iowa Coach of the Year award from the National Federation of State High School Coaches Association, located in Indianapolis. In October 2018, U.S. Cellular named Westercamp one of its 15 Most Valuable Coaches in the nation, earning the school a $5,000 donation. She recently finished her sixth year as a tennis instructor at Dubuque Golf & Country Club and gave tennis lessons at Alpine Tennis Club in Dubuque for 20 years.

"Julie is such an inspiration," Wahlert assistant coach Aimee Walsh said. "She was close to everyone that knew her and definitely made you feel that way. She had such a vibrant, positive personality that we can all aspire to be like. She has made such an impact -- referring to our impact ball we give out at the end of each of our meets -- in every life she has touched and everyone that has known her. I will miss her terribly and it won’t be the same without her contagious smile, attitude, and personality."

The 1981 Loras College grad taught physical education at Western Dubuque High School from 1981 to 2013, along with coaching sports including softball and volleyball. Her zest for life will not soon be forgotten.

“I knew she was getting bad, so I was able to visit her,” Collins said. “We were all telling stories, and her sister asked her what her favorite part of life was. And she had the most Julie response ever: ‘All of it.’”

Through social media, the TH asked those that knew Westercamp to share their favorite memories: