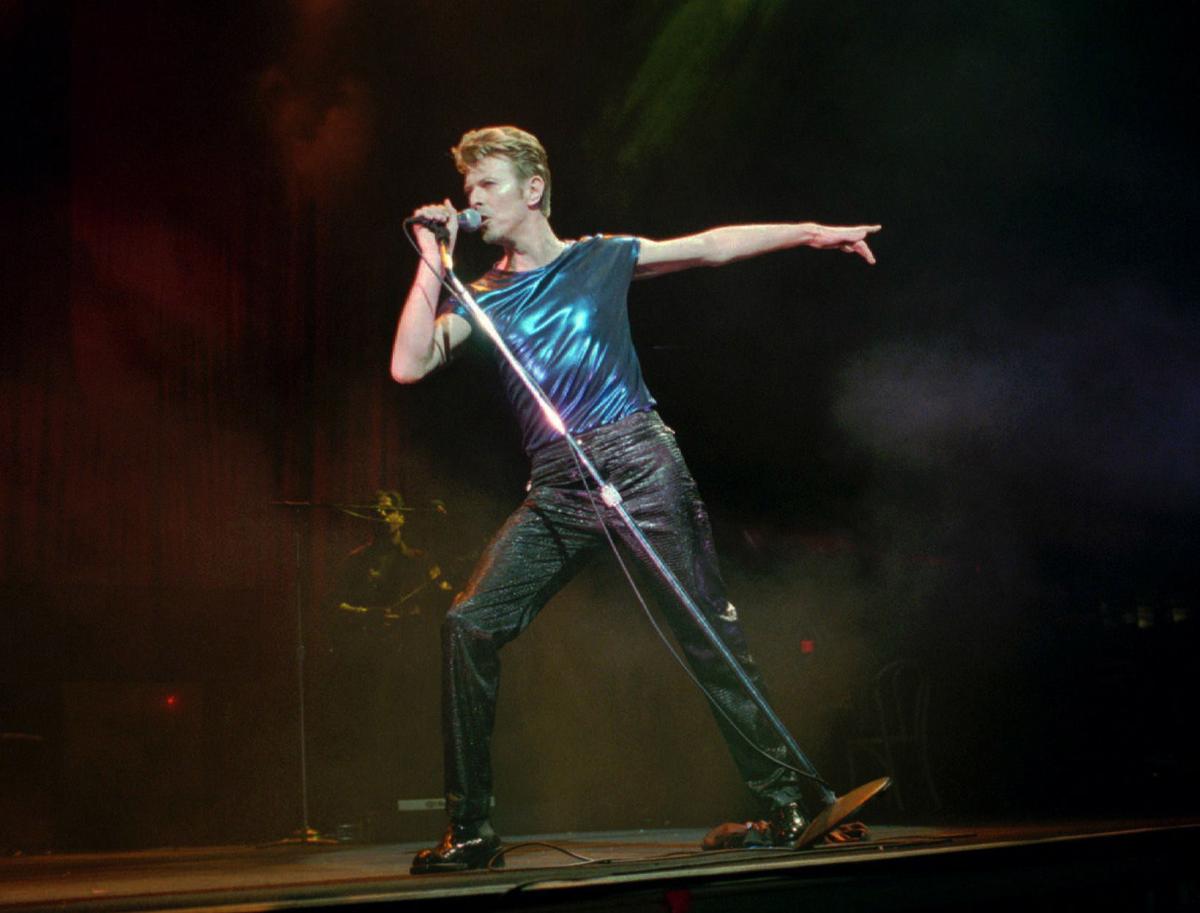 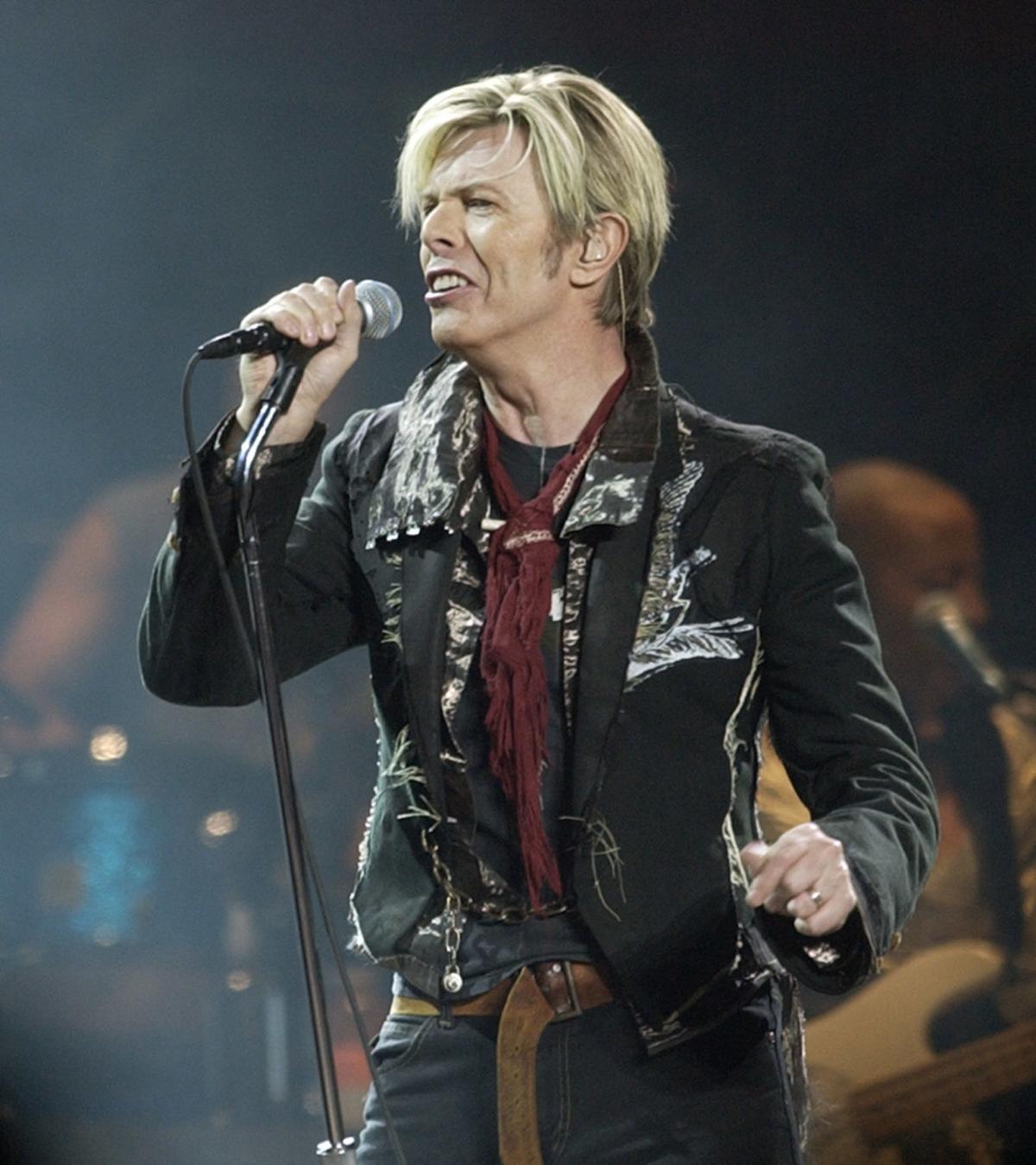 David Bowie, the innovative and iconic singer whose illustrious career lasted five decades, died Jan. 11, 2016, after battling cancer for 18 months. He was 69. 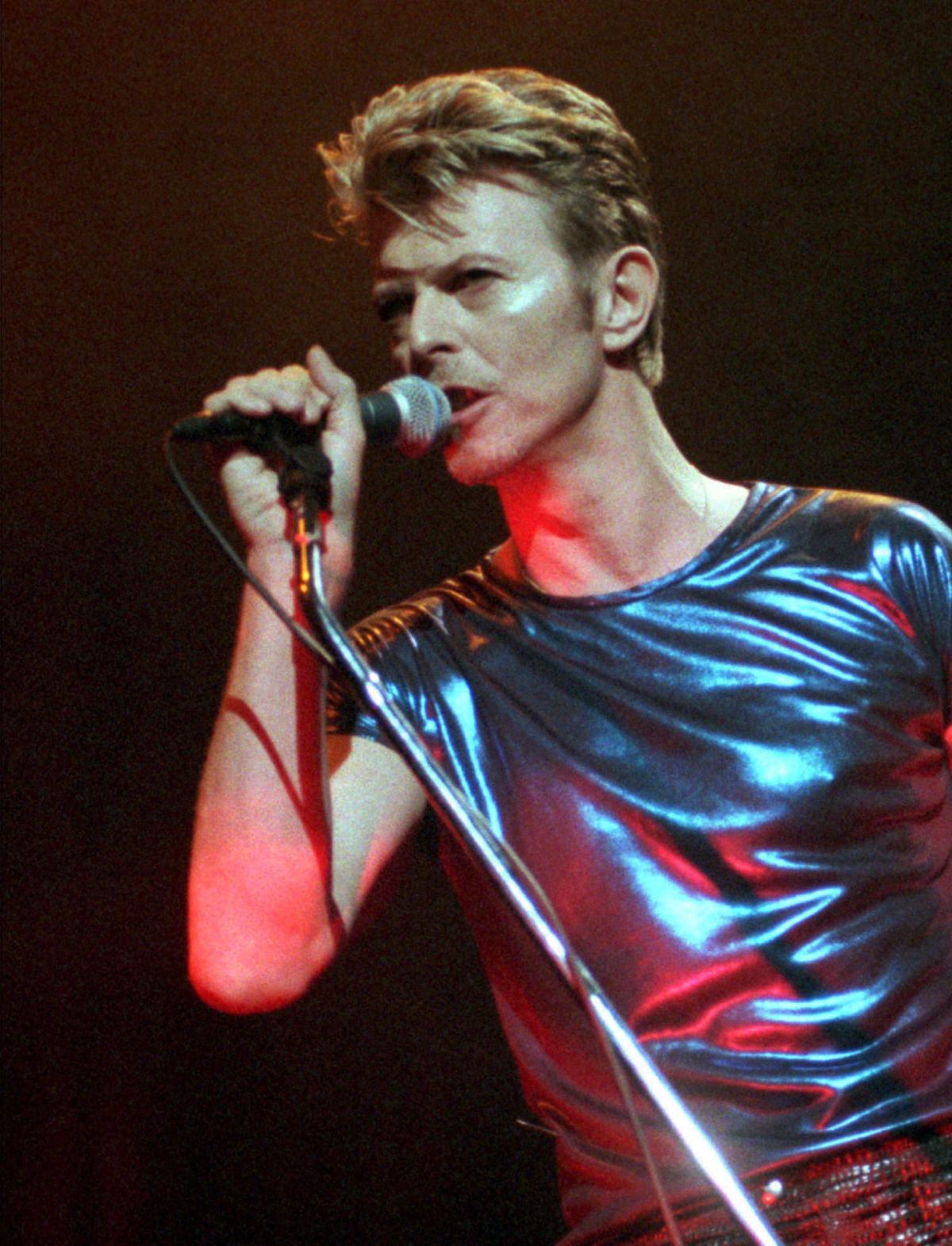 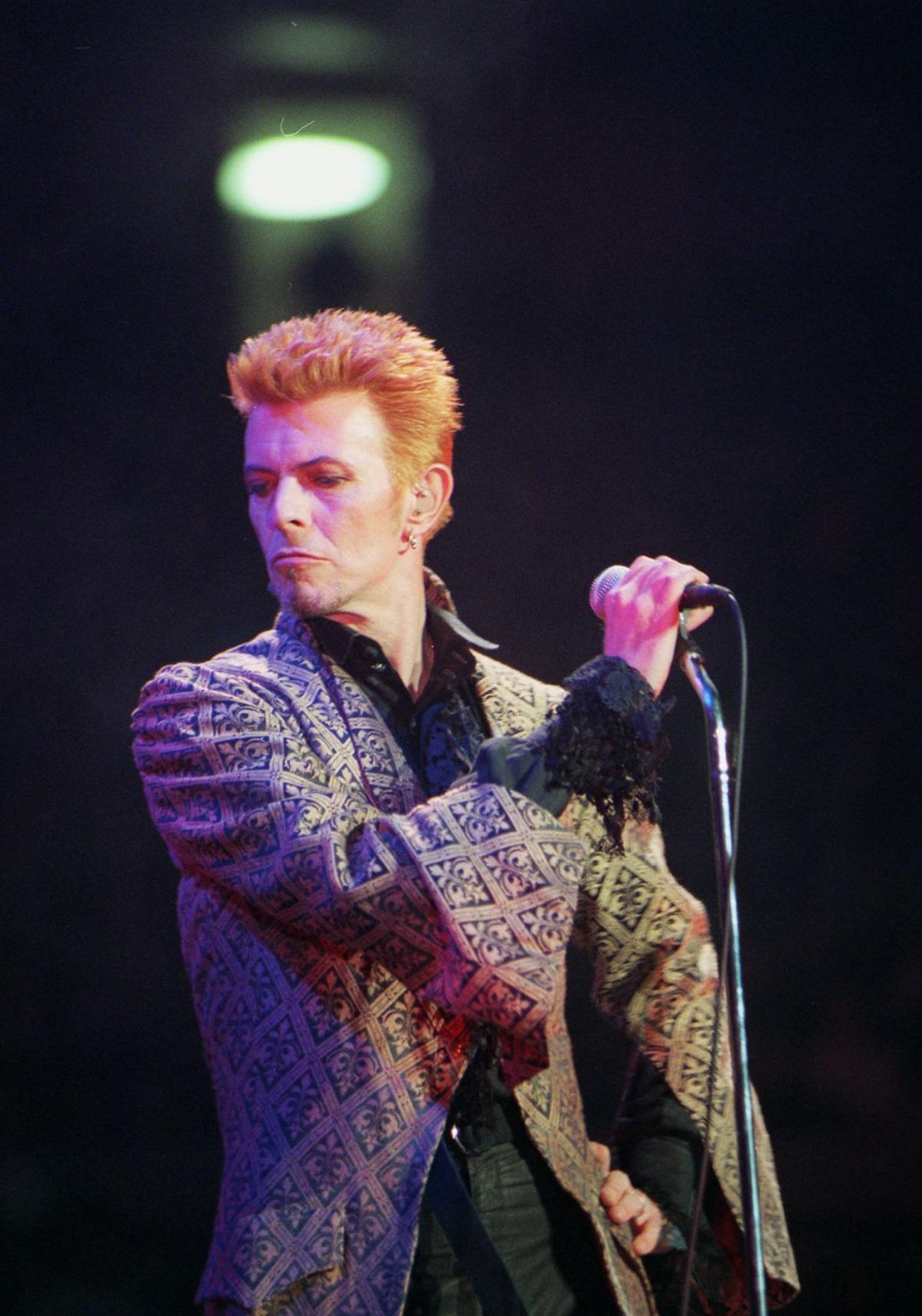 Composer Phillip Glass’s (left) take on the finale of David Bowie’s “Berlin Trilogy” comes three years after the pop icon’s passing. Read about it at TelegraphHerald.com/the_mouth. 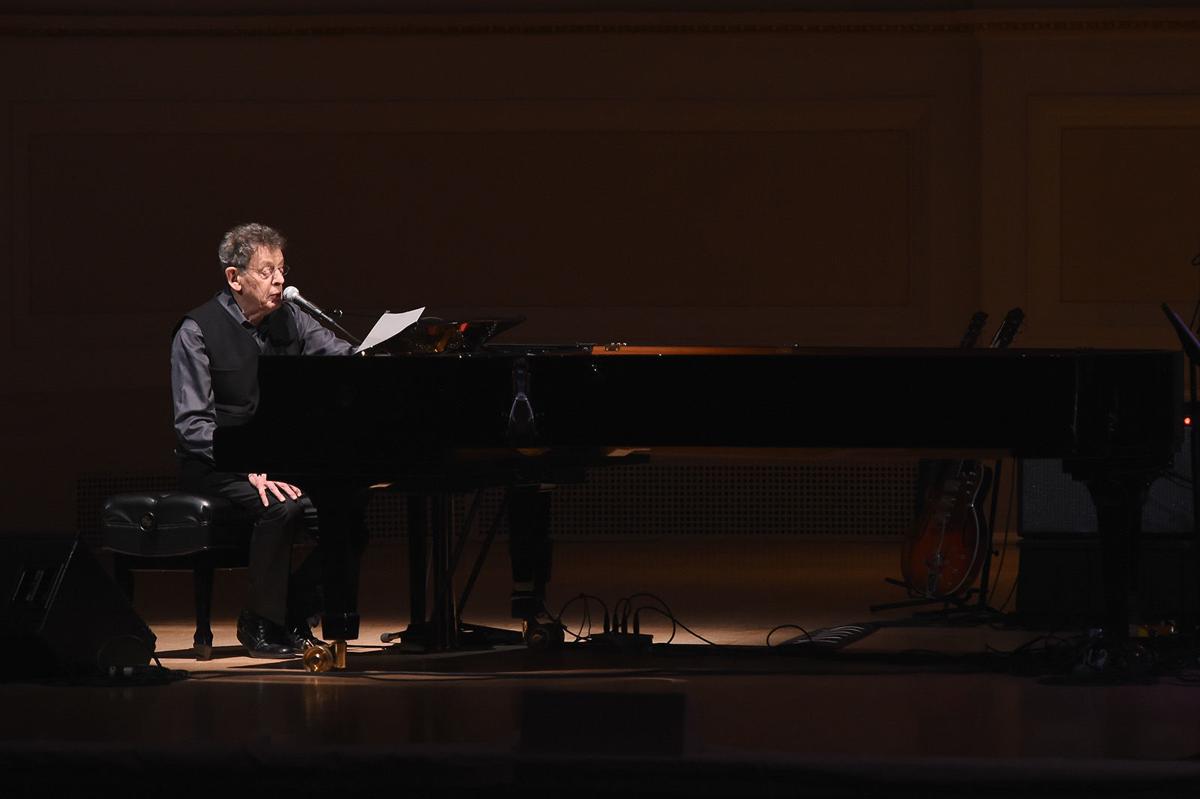 David Bowie, the innovative and iconic singer whose illustrious career lasted five decades, died Jan. 11, 2016, after battling cancer for 18 months. He was 69.

Composer Phillip Glass’s (left) take on the finale of David Bowie’s “Berlin Trilogy” comes three years after the pop icon’s passing. Read about it at TelegraphHerald.com/the_mouth.

The 1979 work had been a bridge connecting Bowie and Glass since the 1990s, when Glass had based symphonies on Bowie’s 1977 albums, “Low” and “Heroes,” and had expressed interest in an eventual focus on “Lodger.”

The composer had spoken with Bowie in 2015 to offer an update on what is now called “Symphony No. 12, Lodger, From the Music of David Bowie and Brian Eno,” which the Los Angeles Philharmonic will unveil as a world premiere on Thursday at Walt Disney Concert Hall.

Glass told him that he was “finally getting around to” the project, and according to Glass, Bowie had replied vaguely: “‘Well, that’s good.’ He didn’t say anything else about it.”

That might have been a good thing, because Glass had his doubts about the musical ideas on “Lodger.” To put it more bluntly: “They didn’t interest me at all.”

That conversation would be their last, and Glass didn’t offer his “Lodger” critique to Bowie, who died in January 2016.

But three years later, the work is a seven-movement symphony that conductor John Adams in a recent conversation called a “song cycle.” The premiere will feature contributions by musicians including Beninese singer Angelique Kidjo, organist James McVinnie and pianists Marc-Andre Hamelin and Orli Shaham.

What took Glass so long?

Driven to write his first two Bowie-themed symphonies by an affection for the melodic themes that Bowie and Eno generated on “Low” and “Heroes,” Glass expected to tap a similar vein for the conclusion of his trilogy. Yet, when he relistened to “Lodger,” the composer was stumped.

“The situation was quite different in that there was much less musical content.”

Glass states this matter-of-factly, as though Bowie and Eno’s experimental, rhythmically dense album lacked the heft to warrant his attention.

Asked to clarify, he added, “In ‘Low’ and ‘Heroes,’ there are actual melodic themes that they composed. When I got to ‘Lodger,’ there were no original musical ideas on that record. And I had forgotten that because I hadn’t heard it in so long.”

He voiced his concern to the L.A. Phil. Informed that other orchestras had already signaled interest in performing it, Glass replied, “Hang on. I’ll call back.”

Searching for a connection he could nurture, Glass focused on Bowie’s words, and ultimately discovered the seed of his symphony.

“The writing was remarkable,” Glass concluded. “It was someone who had created a political language for themselves.”

So Glass stripped “Lodger” of its music until only the lyrics remained. Then, Glass says, he “reset the words.”

Describing it as “a different kind of collaboration” than those for his first two Bowie symphonies, Glass added, “What I was going to do on ‘Lodger’ had nothing to do with the music that was on the record.”

The music on the record wasn’t actually recorded in Berlin but across two 1978-1979 sessions in Switzerland. Featuring Bowie, Eno and a half-dozen players, including Carlos Alomar and Adrian Belew, the team experimented with compositional styles.

“This was an album of many experiments that for the most part worked really well,” wrote Bowie’s longtime producer Tony Visconti in the liner notes to his 2017 remix of “Lodger,” which was approved by Bowie before his death and released as part of the 2017 box set “A New Career in a New Town: 1977-1982.”

Added Visconti, “The lyrics came quicker for David this time.”

Those songs and others became new Glass works. Due to performance limitations, he chose seven of the album’s 10 songs for Symphony No. 12. Glass says the three excluded “Lodger” works — “D.J.,” “Look Back in Anger” and “Red Money” — will be part of another upcoming project.

Referring to the lyrics as “texts,” Glass says he quickly realized that he’d been gifted “a whole piece by a very accomplished writer and artist who had a vision of the world.”

Because Bowie’s original aesthetic decision was to sing “Lodger” by himself, Glass too concluded that the best way forward was to have one singer.

“The voice of the writer was so clear that I didn’t want to start recasting it,” he says.

The composer had worked with singer Kidjo on an earlier piece, and he knew she possessed an essential, “beyond wonderful” trait: “The singer had to have a persona of their own just to handle this stuff,” Glass says. “So when Angelique sings it, it becomes Angelique’s piece. Now that’s interesting. It’s not Angelique being David Bowie. It’s Angelique being Angelique.”

Glass was unconcerned with what Bowie would have thought of his method. When they had talked about the “Low” and “Heroes” symphonies, Glass recalled Bowie saying that he was most struck by “the parts that didn’t sound very much like the original.”

For example, the composer adds, Bowie “liked ‘Heroes’ more than ‘Low’ because he thought that ‘Low’ was very close to what he wrote, whereas in ‘Heroes’ he thought there were more departures. I thought it was the other way around.”

That the mercurial Bowie’s work is so ripe for interpretation is a testament to its durability, says organist McVinnie on the phone from London. Last year McVinnie released “The Grid,” which was issued on Glass’ imprint and set to organ some of Glass’ work from the film “Koyaanisqatsi” and elsewhere. A few years ago McVinnie performed on an interpretation of Bowie’s “Blackstar” with an ensemble led by Los Angeles composer Jherek Bischoff.

“It’s so hard to know what to do when you want to reinterpret this music — present a kind of mirror or the other side of the coin,” McVinnie says.

Adds Glass, “The creativity of interpretation is profound. I think it’s not appreciated as much. A performer brings a creative vision, which can enhance the piece, it can fail, it can disappear.” Adding in a singer with depth like Kidjo, he says, “is like putting another scoop of ice cream into the milkshake. It’s not diluting it. It’s adding to it.”

The first time composer Adams learned of Glass’ work on the “Lodger” symphony was at the Kennedy Center in Washington, D.C. At the time, Adams says, “he’d only started sketching it, but he knew that he wanted to set these texts by David Bowie.”

Adams, who will also conduct his own work, “Grand Pianola Music,” as part of the program, says that one of the unique traits of Glass’ new work “is that it’s a symphony, but it’s also a song cycle.” He added that the other day he was struck by Glass’ word choice during a phone call.

“I noticed he wasn’t saying ‘the third movement’ or ‘the fourth movement.’ He was saying, ‘the third song,’ ‘the fourth song.’ That was kind of revealing, that he really does view it as much a song as a symphony.”

Framing the new work in such terms is almost beside the point, Glass says of reworking Bowie’s lyrics.

“As a composer being handed these, it made my hair stand on end. ‘My God. This is amazing writing, and I have to do something with it.’ And it pushed into writing something that I don’t think I would have written.”