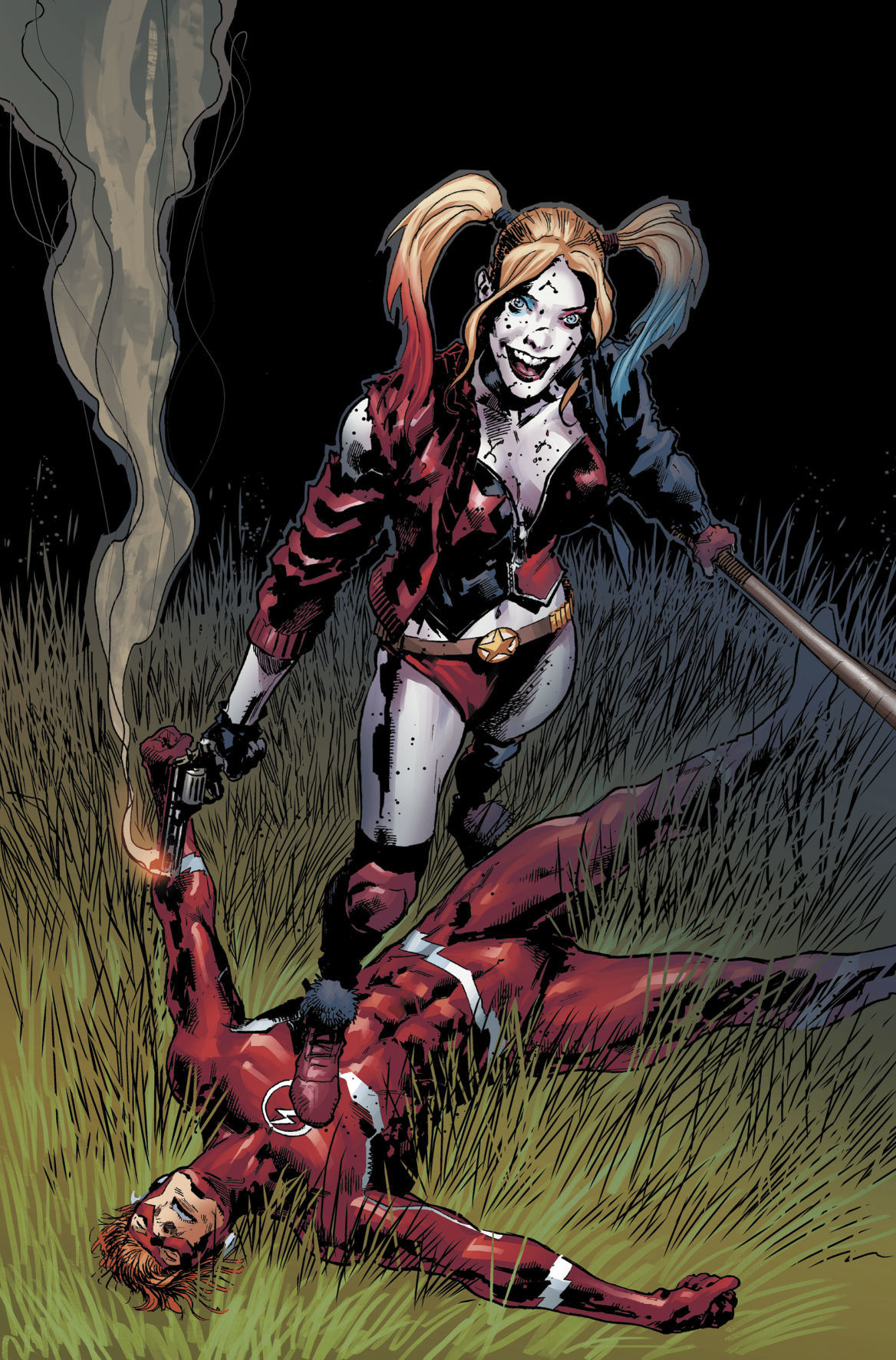 Who killed the heroes at Sanctuary? Batman (not pictured) thinks it's Harley Quinn, and this shot of her standing over the body of Flash III (Wally West) doesn't help her case. Cover art to "Heroes in Crisis" No. 4 by Trevor Hairsine. 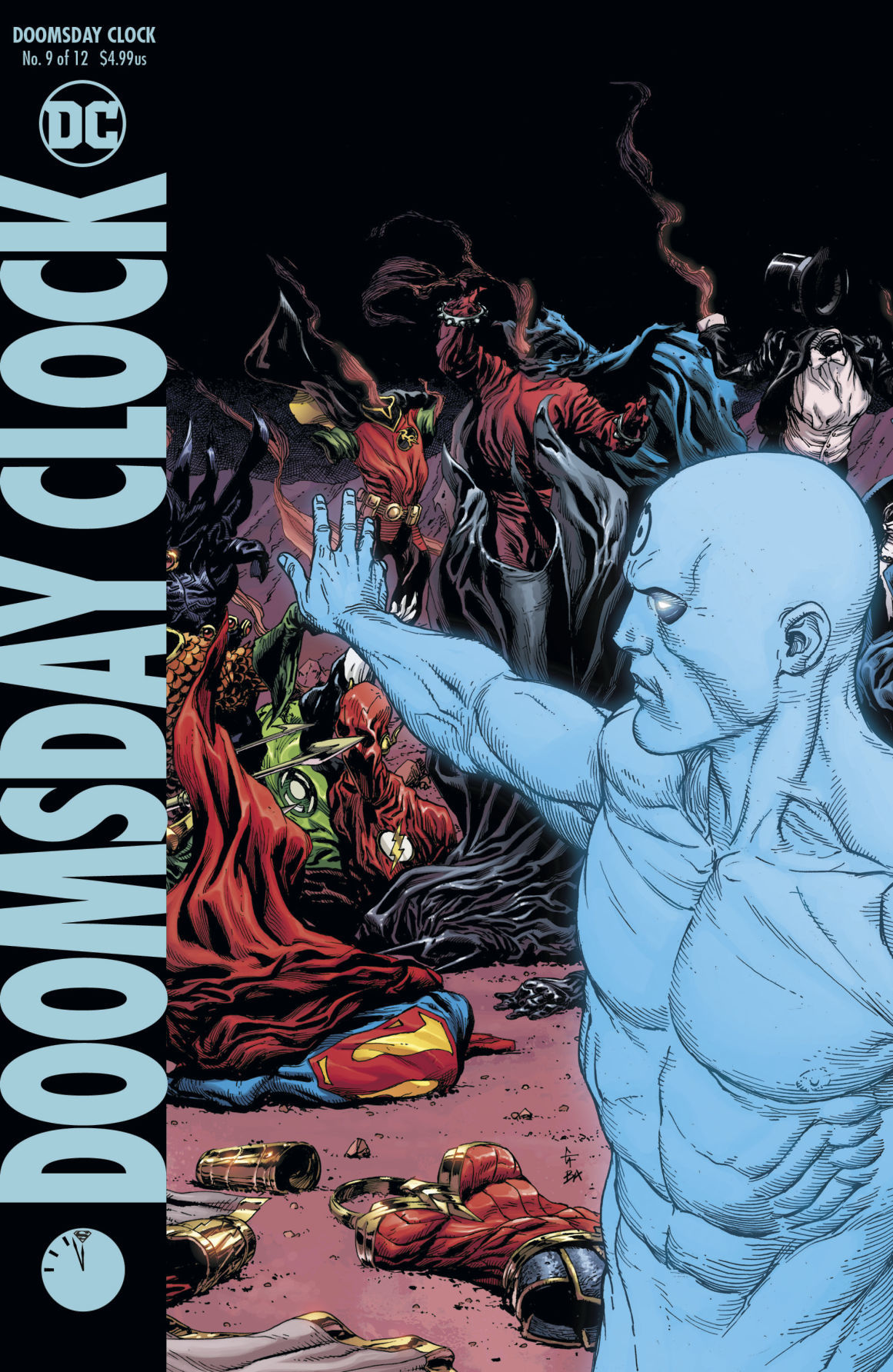 Did Dr. Manhattan change the DC Universe? And if so, why? These questions are being addressed in "Doomsday Clock." Variant cover art to "Doomsday Clock" No. 9 by Gary Frank. 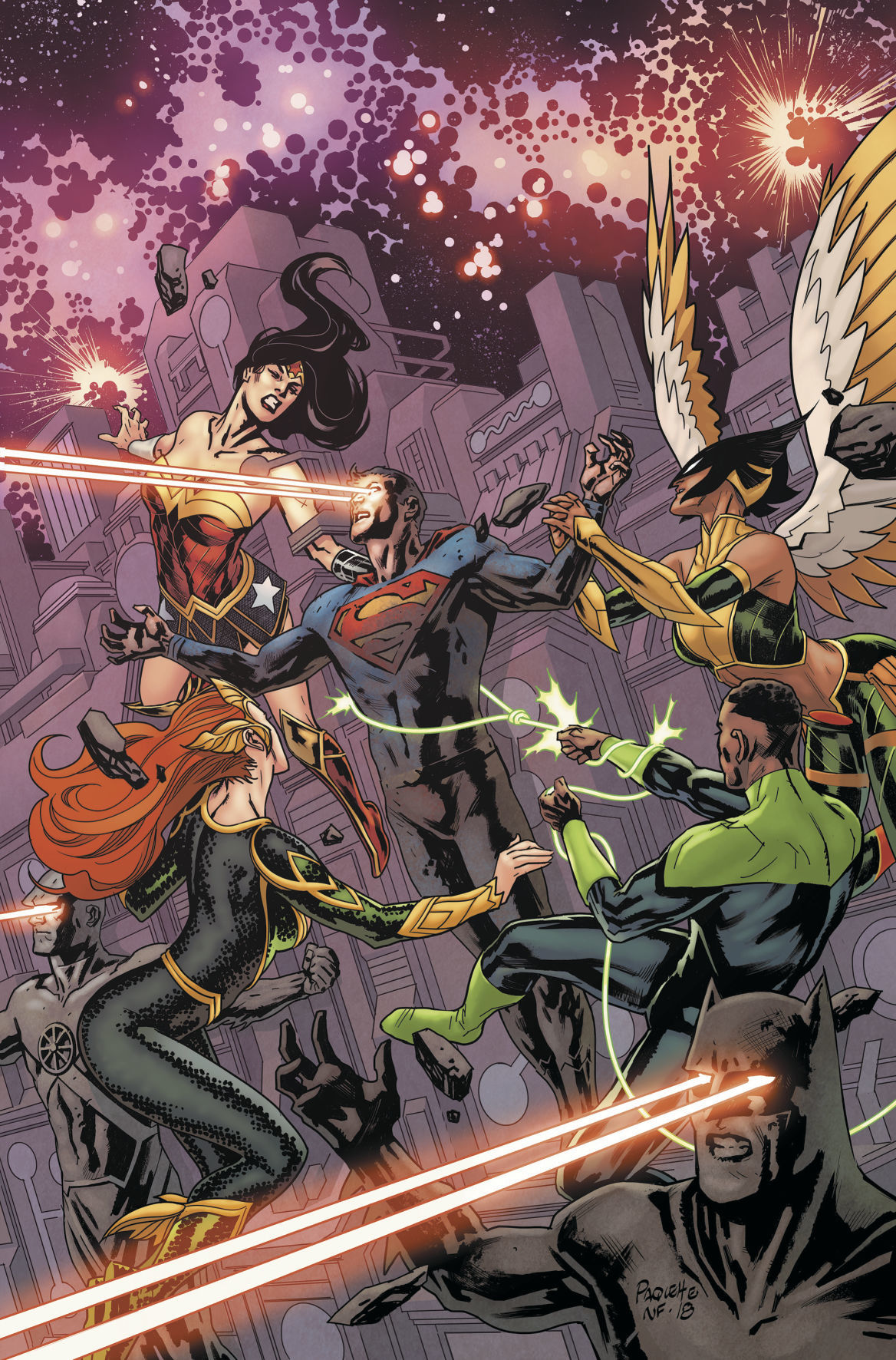 Things aren’t going so well for our super friends in the pages of DC Comics. And, to paraphrase Ralph Dibny on “The Flash” TV show: It’s not even summer!

Summer has long had a special place in comics. Back when the books were aimed exclusively at children, summer meant kids with more free time and — more importantly — more disposable income. So summer is when publishers would gin up extra issues of ongoing series, annuals and specials.

Now comics are aimed mostly at adults, but summer is still special. That’s traditionally when the publishers roll out their big “event” stories. The cape-and-cowl crowd must dread the summer months, when Infinite Crises, Infinity Gauntlets and similar challenges are the order of the day.

But things are already horrifically awry in the DC Universe, and it’s only February. Our harried heroes are facing at least a clutch of distinct problems that qualify as extinction events.

The big one is occurring in the Justice League line of books, where the multiverse is dying. Yep, the whole enchilada. It began two years ago in a series called “Dark Nights: Metal,” and has snowballed into a crisis whose true face was revealed in the recent “Justice League Annual” No. 1.

Points to DC for giving us a book that doesn’t require you to have read every related book to understand what’s going on. “Justice League Annual” No. 1 drops what explanation is needful and then barrels on like Chicken Man with his head on fire.

But it’s still helpful to know what is going on, and I’m a helpful kind of a guy.

So, here’s the skinny:

In “Dark Nights: Metal,” a mystery surrounding the Nth metal — the stuff that allows Hawkman to fly — reveals that the multiverse is being invaded by a “dark” multiverse, a funhouse mirror image of the multiverse with infinite planets where everything is totally evil. Batman and the Justice League foil the invasion, but at a price: The Source Wall suffers a breach.

The Source Wall, for you younger fans, was created by the legendary Jack Kirby in his “Fourth World” series of books in the 1970s, but he never really bothered to explain it. It’s this big wall-like thing that surrounds the outer fringes of the multiverse (or perhaps there’s one surrounding each universe, it’s not really clear) and anyone who tries to breach it becomes a giant stone statue that adds to the wall, its eyes forever shooting light back into the universe, serving as both punishment and warning. Pretty cool visual, but that’s about all we knew about it.

Turns out breaching the wall is bad news. Terrible things came in, including an “Otherverse” of horrific monsters that is currently wiping out magic in “Justice League Dark,” a book starring Wonder Woman, Zatanna, Swamp Thing, John Constantine, Man-Bat and, uh, Detective Chimp. (No, seriously, he’s a pretty cool character, so go read that book.)

On the good news front: Martian Manhunter, Hawkgirl and a couple of Green Lanterns re-joined the Justice League, and a couple of them had undergone some changes and/or made some self-discoveries that would prove important later, especially Hawkgirl. Also, Batman built the Hall of Justice, which is just cool, even if you didn’t grow up watching “Super Friends.”

As we learned in “Justice League: No Justice,” one set of escapees from the Source Wall are the Omega Titans, four mysterious giants who plant giant trees that will transform our multiverse into … I’ve forgotten what. Something bad. Not important, since the League stopped them from doing it.

But once again, victory comes with a high price: A bunch of worlds that Brainiac had shrunk and put into bottles were released, creating a new galaxy of unknown and/or forgotten worlds, some of which are really dangerous. “Justice League Odyssey” explores this trauma, starring a Green Lantern (Jessica Cruz), Cyborg, Starfire, Azrael and, uh, a reborn, young adult Darkseid. (No, seriously, he’s part of the show, if not the team, and this is also a good book.)

Also, the planet Colu (from whence all Brainiacs spring) was destroyed. Sorry, Colu.

Where was I? Oh, yeah, “Justice League Annual” No. 1. In previous issues of “Justice League,” Lex Luthor had finally discovered his role in the multiverse, as an agent of fate, known as “Doom” in old Anglo-Saxon and Norse. Or something like that. Anyway, now he’s not only evil, he’s, like, self-actualized. He forms the Legion of Doom (also “Fate,” remember?), complete with the “Super Friends”-inspired headquarters, and steals The Totality from the Justice League.

Right, The Totality, forgot to mention that. This is an object that came through the Source Wall breach, a battery of sorts that powered the creation of the current multiverse and still has the power to re-shape it. Seriously, it’s the greatest power source imaginable, and Lex Luthor’s got it.

Also, he traveled through time to find Starman, captured him and tortured him for information on The Totality. Starman is a name that applies to roughly umptyquadrillion characters in DC history, so I have to identify which Starman, and it’s Will Payton, the Starman of the 1980s. You can be forgiven if you don’t remember him because he’s really obscure. But the connection here is that his powers came from an unidentified source, and Luthor identifies it: It’s The Totality.

Starman escapes, and now he’s all Zen-like and cosmic, and he finds the League. Now we’re caught up to “Justice League Annual” No. 1, where they all head off to repair the Source Wall. Between Starman, the Omega Titans (one dead, three captured) and Hawkgirl’s “Dark Nights Metal”-altered wings, they have everything they need to putty up the Source Wall and put all to rights.

Of course, Luthor has other plans. Evil hijinks ensue, and (spoiler) the League fails. Big time. Now the multiverse is still dying, and nobody really has a clue what to do about it.

Also, a cosmic being who created the multiverse before ours named Perpetua has been resurrected. Turns out she’s not happy about these new kids at all. And as the mother of The Monitor, The Anti-Monitor and The (not-yet-introduced) World-Forger, she’s got the power to overwrite us like a bad bit of computer code if she wants to. And it looks like she wants to.

And that’s not the only crisis facing our heroes. Over in “Doomsday Clock,” the “Official Sequel to Watchmen,” the supers are on the trail of someone who is responsible for the 2011 re-write of the DC Universe that we out in the real world called “The New 52.” And that someone is Dr. Manhattan, who you might remember as the virtually omnipotent “Watchmen” character who is to Superman what we are to ants. Is he connected to the Source Wall? Or is he just waiting his turn? Stay tuned!

Meanwhile, “Heroes in Crisis” gives us totally different problem. The series posits a psychiatric hospital of sorts for superheroes called The Sanctuary, run by Superman, Batman and Wonder Woman to give solace and counseling to those who suffer PTSD and other psychic trauma from the never-ending battle.

Unfortunately, somebody just killed a handful of characters there. Plus, someone is sending Lois Lane videos of counseling sessions, which she feels obliged to write about (or someone else will). While the superhero community mourns its fallen, the citizenry at large is astonished and terrified to learn how damaged their protectors are.

Over in “Doomsday Clock,” the citizenry is astonished and terrified at the rumor that the reason the United States has so many superheroes is that the government created them. It’s not true, of course. Or is it? And are the two crises connected? Is the Source Wall connected?

I’d wonder what DC has saved for the summer. But a more pertinent question is whether the DC Universe will still be around come June.

I guess we have no choice but to read “Justice League” to find out.