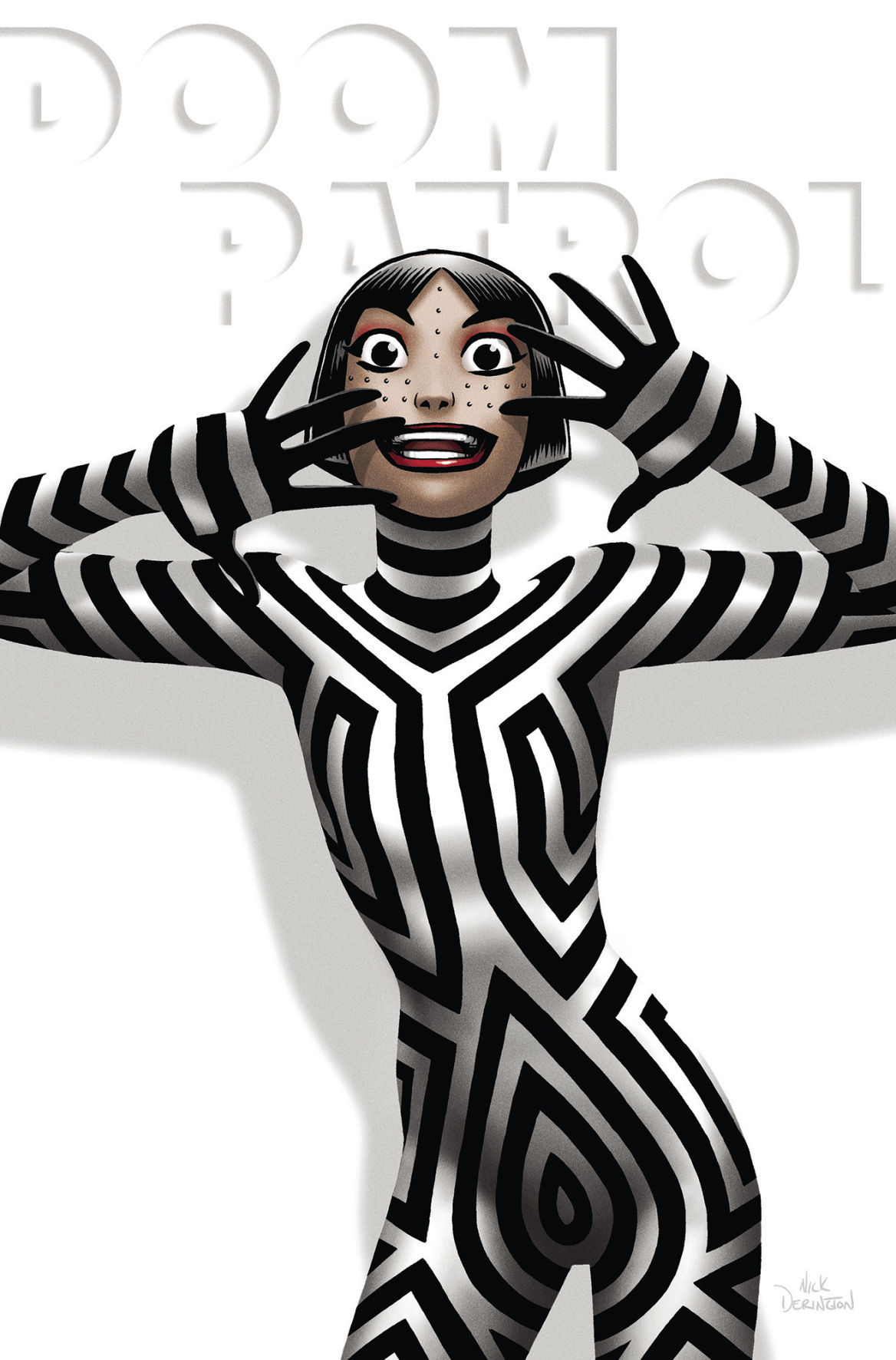 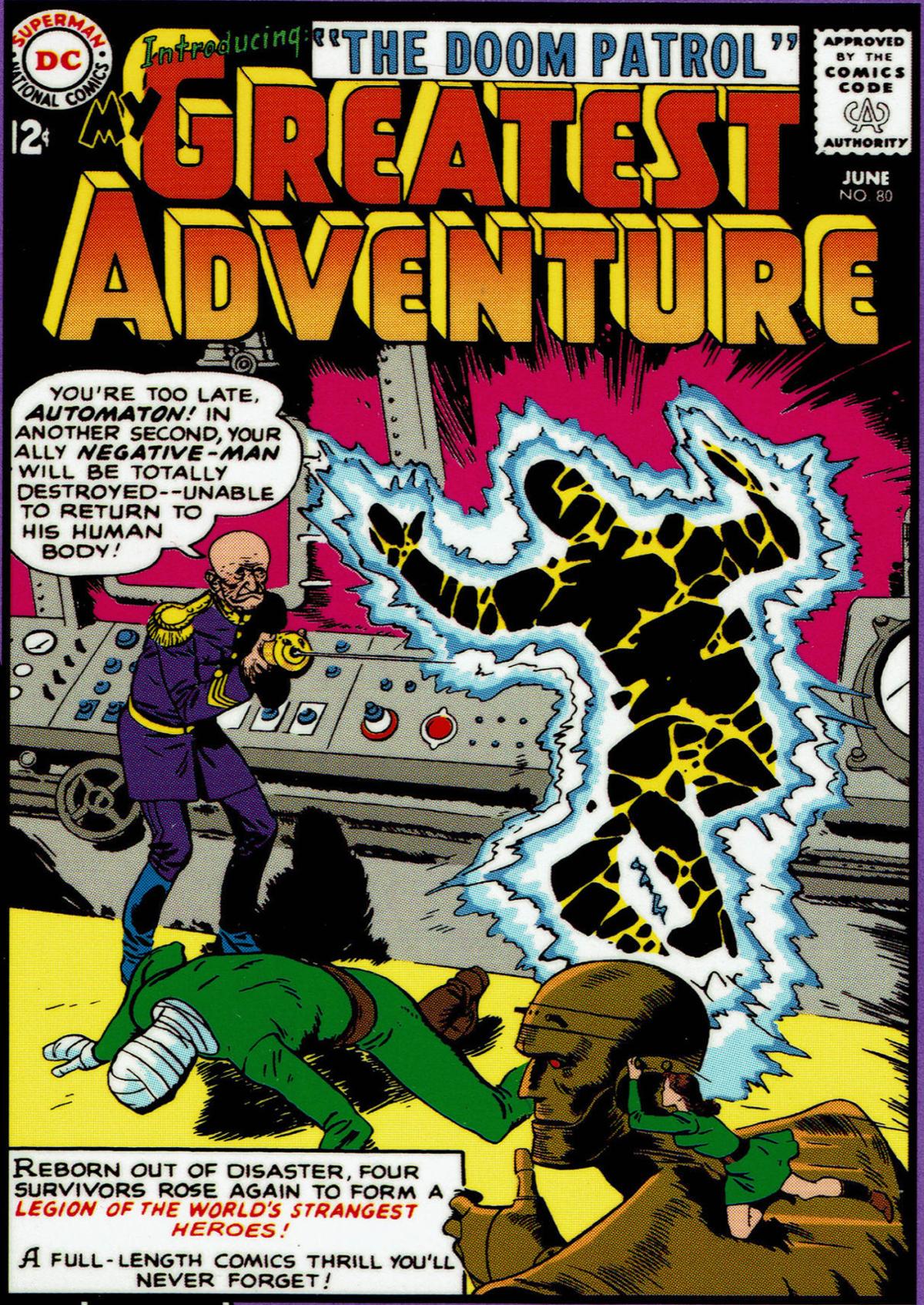 Robotman was initially called Automaton when the Doom Patrol premiered in "My Greates Adventure" No. 80 in 1963. Cover art by Bruno Premiani. 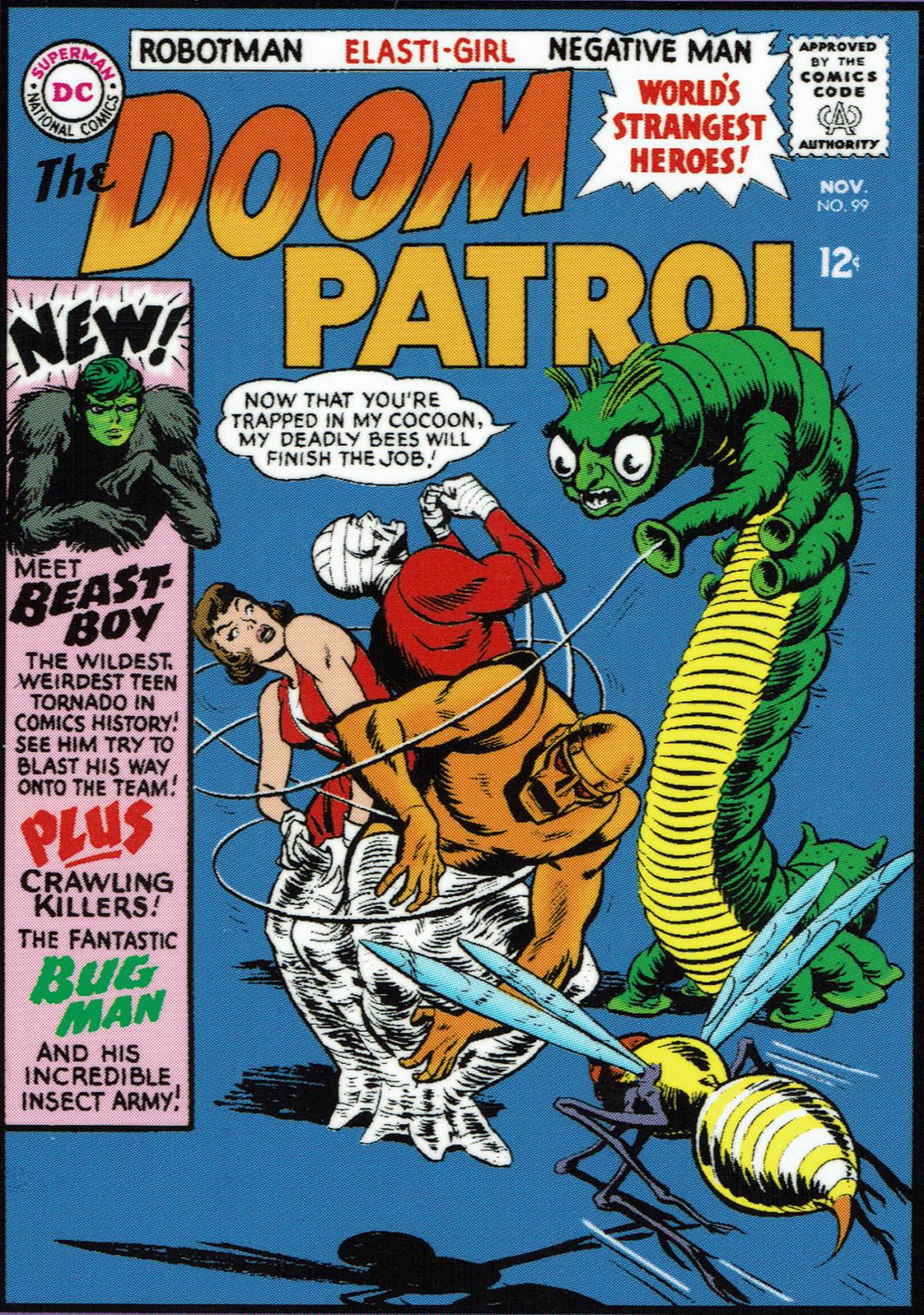 Garfield "Beast Boy" Logan debuted in "Doom Patrol" No. 99 in 1965. He went on to become an important character in "Teen Titans." Cover art by Bob Brown.

Things are about to get weird on the DC Universe streaming service.

“Doom Patrol” premieres Friday, Feb. 15, featuring a superhero team that’s one of the oddest in DC Comics’ enormous stable of characters. And it’s on purpose. Many “Doom Patrol” covers in the 1960s featured the blurb “The World’s Strangest Heroes!”

We got an inkling of just how strange they are when they appeared in the Nov. 2 episode of “Titans,” the live-action show on DC Universe starring Robin, Starfire, Hawk and Dove, Raven and Beast Boy. That last character is critical, because in both comics and TV Garfield Logan — the kid who can turn into an animal — is the link between the DP and the Titans.

So who are these guys? I’m so glad you asked that question.

Both creators are interesting in their own right. Premiani was born in Trieste, but was expelled from Italy for anti-Mussolini political cartoons. He moved to Argentina in 1930, and 18 years later to the United States, where he had a distinguished career in comics. Not only did he draw the first iteration of the Doom Patrol pretty much from its first issue until its last (in 1973), but he also drew the first adventure of a team of sidekicks that would later be called the Teen Titans.

Premiani’s work was unique during his time in American comics, drawing on European and Argentine traditions unfamiliar to American audiences. His work had a textured, organic look which even extended to the all-metal Robotman. The character’s metal “skin” looked soft and flexible, anticipating the look and lightness of today’s composite tank armor.

Then there was Premiani’s machinery. Contemporaries like Jack Kirby and Jim Steranko conceived of elaborate, futuristic laboratories full of fantasy machinery whose operation and function was anybody’s guess. Premiani, by contrast, penciled banks of equipment that would look at home in a 1930s Frankenstein movie. Full of industrial wiring, vacuum tubes, gauges, rheostats and the like, Premiani’s machinery was bulky, anachronistic, imposing and dangerous looking.

To almost no one’s surprise, Drake later worked for Marvel Comics proper, where he co-created several important X-Men characters, including Lorna “Polaris” Dane (starring on Fox’s “The Gifted”). Having also co-created cult favorite Boston “Deadman” Brand at DC, Drake is one of the more significant figures in what is now called the Silver Age of Comics (1954 to roughly 1970).

Drake, Premiani and DC colleague Bob Haney came up with four main characters in 1963, all of which were featured on “Titans”:

Niles “The Chief” Caulder: A brilliant scientist and surgeon, Caulder saved the lives of the three field team members after tragic accidents and formed the Doom Patrol so they’d feel useful.

Cliff “Robotman” Steele: Steele was a daredevil and race car driver whose fiery crash at the Indianapolis 500 left only his brain alive. Caulder placed the brain in a full-body robotic prosthesis, initially called “Automaton” but quickly changed to “Robotman” because, as Drake has said in interviews, he realized Automaton was an atrocious name.

Rita “Elasti-Girl” Farr: An Olympic swimmer turned actress, Farr was exposed to unknown volcanic gases during a movie shoot in Africa. Initially her freak factor was that she was doomed to an early death, but that problem has been leveled up: Now she is shown to actually be a blob of protoplasm who has to concentrate to retain her human form. Her super-power (which wasn’t shown on “Titans”) was the ability to expand or contract any part or all of her body to gigantic or tiny size.

Larry “Negative Man” Trainor: Test pilot Trainor flew through a radioactive cloud in the upper atmosphere and became radioactive himself. Further, a negatively-charged energy being can emerge from Trainor’s body for a short period of time, able to fly at high speed, cause non-explode-y stuff to explode and move through solid objects. (That super power wasn’t shown on “Titans,” either.) Trainor has to wear specially-treated bandages (invented by The Chief) from head to toe at all times to avoid giving everyone around him radiation poisoning.

In the comics, Rita eventually married a billionaire named Steve Dayton, who invented headgear that gave him remarkable mental powers (so he could tag along on DP missions and keep an eye on his wife). Giving himself the unfortunate name “Mento” — which made him sound like a breath mint — his arrogance exacerbated friction between himself and the two male members of the field team. Their constant sniping at each other was a highlight of the book.

Another important add-on was Garfield “Beast Boy” Logan, a green teenager with the ability to change into any animal. This was due to an experimental serum he was given to save his life from “Sakutia,” a disease that sounds too much like 1960s expression “sock it to me.” What is it with this strip and unfortunate names? Anyway, the serum gave him his bilious hue and his super power in addition to saving his life.

Gar wanted to join the DP, but in an amazing thunderstroke of common sense, the team refused because he was a minor. (Are you listening, Batman?) Regardless, he remained part of the ensemble cast (and occasionally guest-starred over in “Teen Titans”). Well, until the entire Doom Patrol was killed, that is.

Yep, in another unique development, DC killed off the entire original team when sales dropped and the book was canceled. (Beast Boy and Mento survived.) This being comics, Niles, Cliff, Rita and Larry were all restored, one by one, through one miraculous development after another. But still, the death scene was quite a shock in 1973, and has become a legend in comics lore.

Beast Boy went on to become a founding member of the second iteration of Teen Titans in 1980 — the same group starring in “Titans” on DC Universe. Gar has been shown to have had a past with the DP, so that relationship has survived the transition from comics to TV.

Later iterations of the DP established The Chief as a sociopath and borderline villain, even hinting that he might have caused the accidents that turned Cliff, Rita and Larry into freaks. Those traits, too, seem to have found their way to TV, where The Chief is played in menacing fashion by Timothy Dalton.

After the original team’s “death” in the comics, The DP had several mediocre revivals, but that all ended when legendary writer Grant Morrison (“Happy!”) took over the book in 1989. He merged Larry Trainor, the Negative Man creature and a black, female doctor to become the transgender, transracial “gestalt entity” named Rebis, and added a host of wild characters in a series of surreal adventures that still have fans talking (possibly because we still don’t understand them).

Descriptions of the live-action “Doom Patrol” promise two of those new characters:

Danny the Street: The aptly named Danny the Street is a sentient roadway named Danny. Seriously. He is an ambient strip of road, complete with shops and restaurants, that can appear in any urban landscape without disrupting the local geography, and somehow be accepted by local residents as always having been there. He can’t talk, but does communicate through menus, movie marquees, sandwich boards and the like. Since the Doom Patrol on TV has its mansion on “Danny Street,” methinks we’ve already seen him.

Crazy Jane: Kay Challis suffers from dissociative personality disorder, with each of her 64 personalities having a different super power. Kay is hopelessly insane due to childhood abuse, and a personality named Jane Morris dominates her mind most of the time — hence, “Crazy Jane.”

“Doom Patrol” the comic book continues to appear now and then, mostly in DC’s various mature-reader imprints. Because post-Morrison, the Patrol will never be safe for children (and some adults) again.

That appears to be true on TV, as well. In addition to Dalton’s mad scientist take on The Chief, we’ve seen Rita (April Bowlby) degenerate into protoplasm, the bandaged Larry (Dwain Murphy/Mat Bomer) cook enormous meals he can’t eat and the pitiable Robotman (Jake Michaels/Brendan Fraser) ponder life in a tin can is worth living.

So yes, things are about to get weird. But if the Doom Patrol’s past is any indication, it’s the kind of weird we’re going to enjoy.