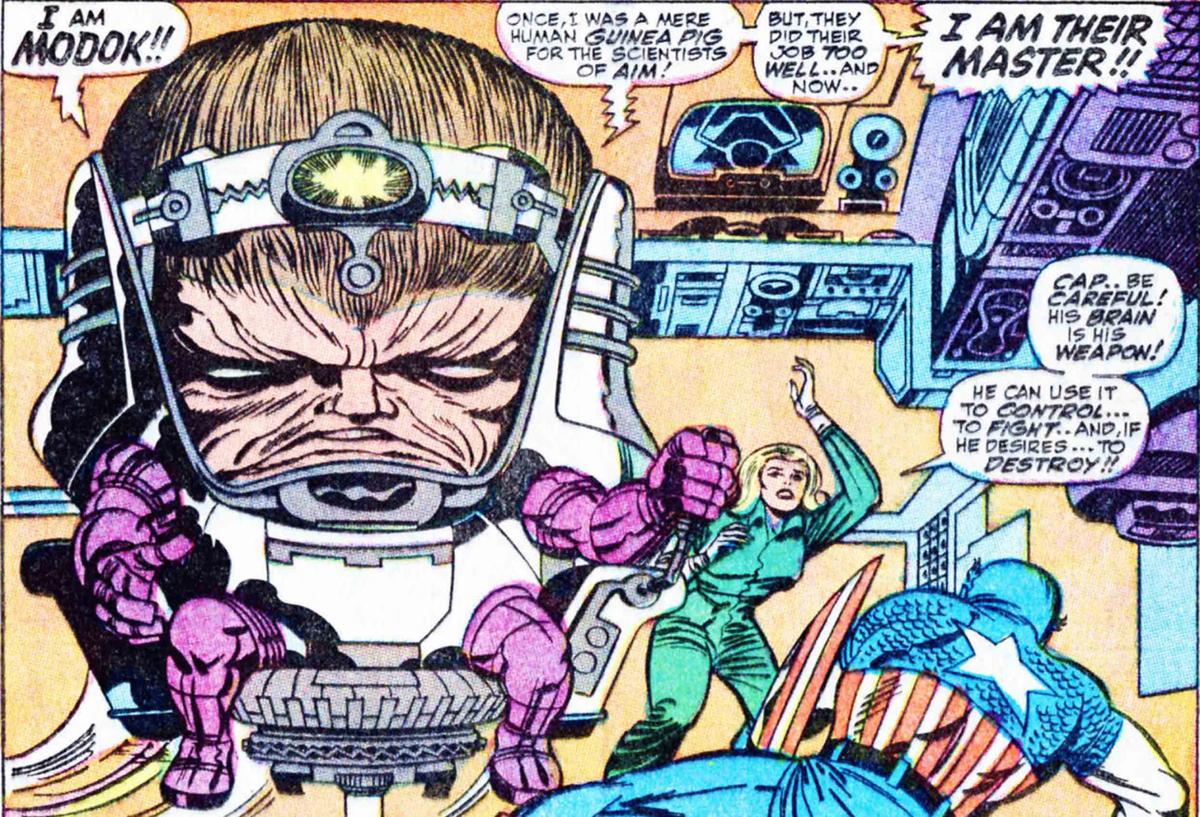 M.O.D.O.K. didn't even appear on the cover of the issue in which he first appeared, perhaps because nobody would buy a comic book with this ugly mug on it. But here's his first appearance, from "Tales of Suspense" No. 94 (1967). That's Captain America in the red, white and blue, of course, and Sharon Carter, Agent 13 of S.H.I.E.L.D., in the green jumpsuit. Art by Jack Kirby. 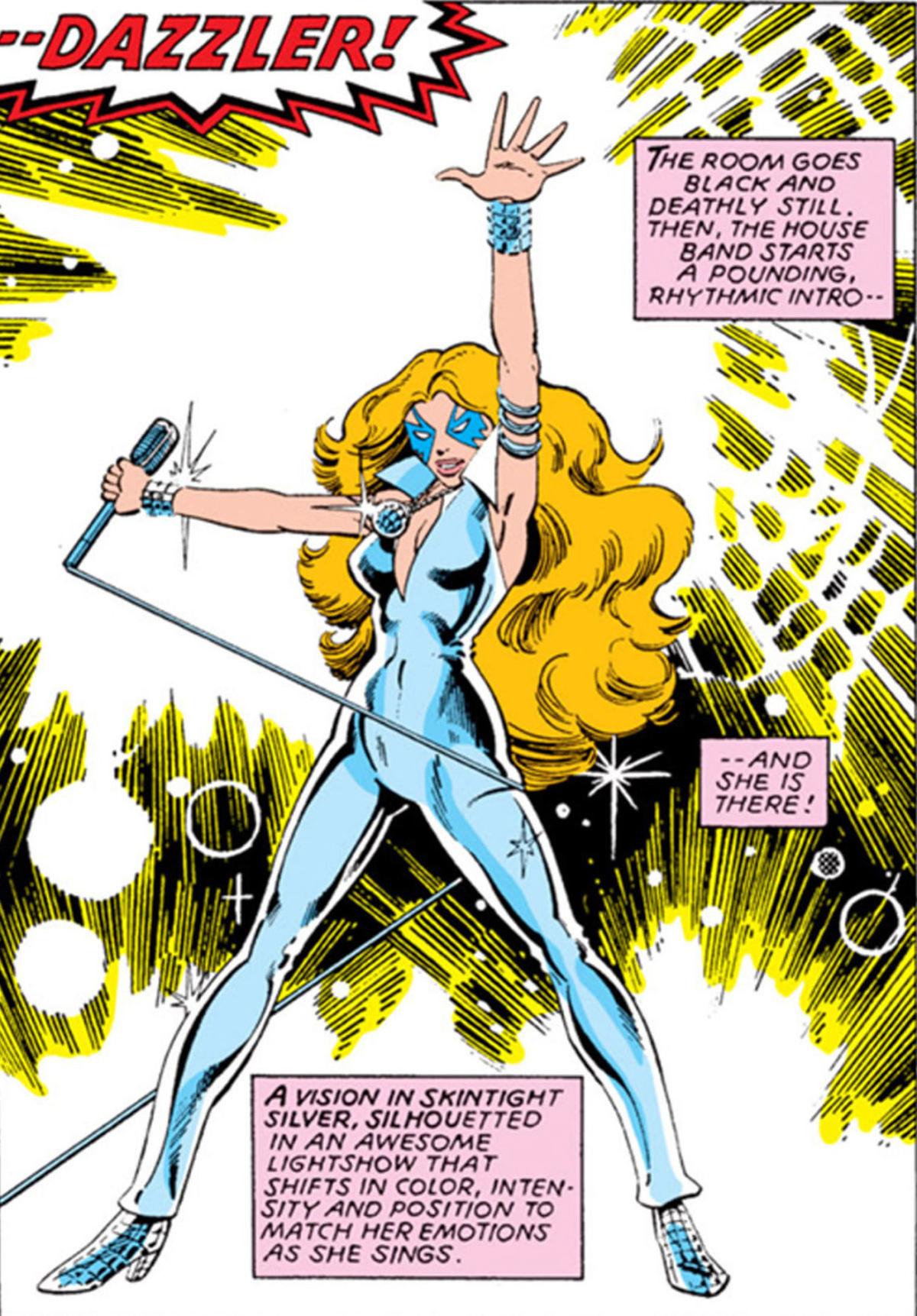 Here's Dazzler's first appearance, from "Uncanny X-Men" No. 130 (1980). She was obviously meant to be a major character, but it just didn't turn out that way. Art by John Byrne. 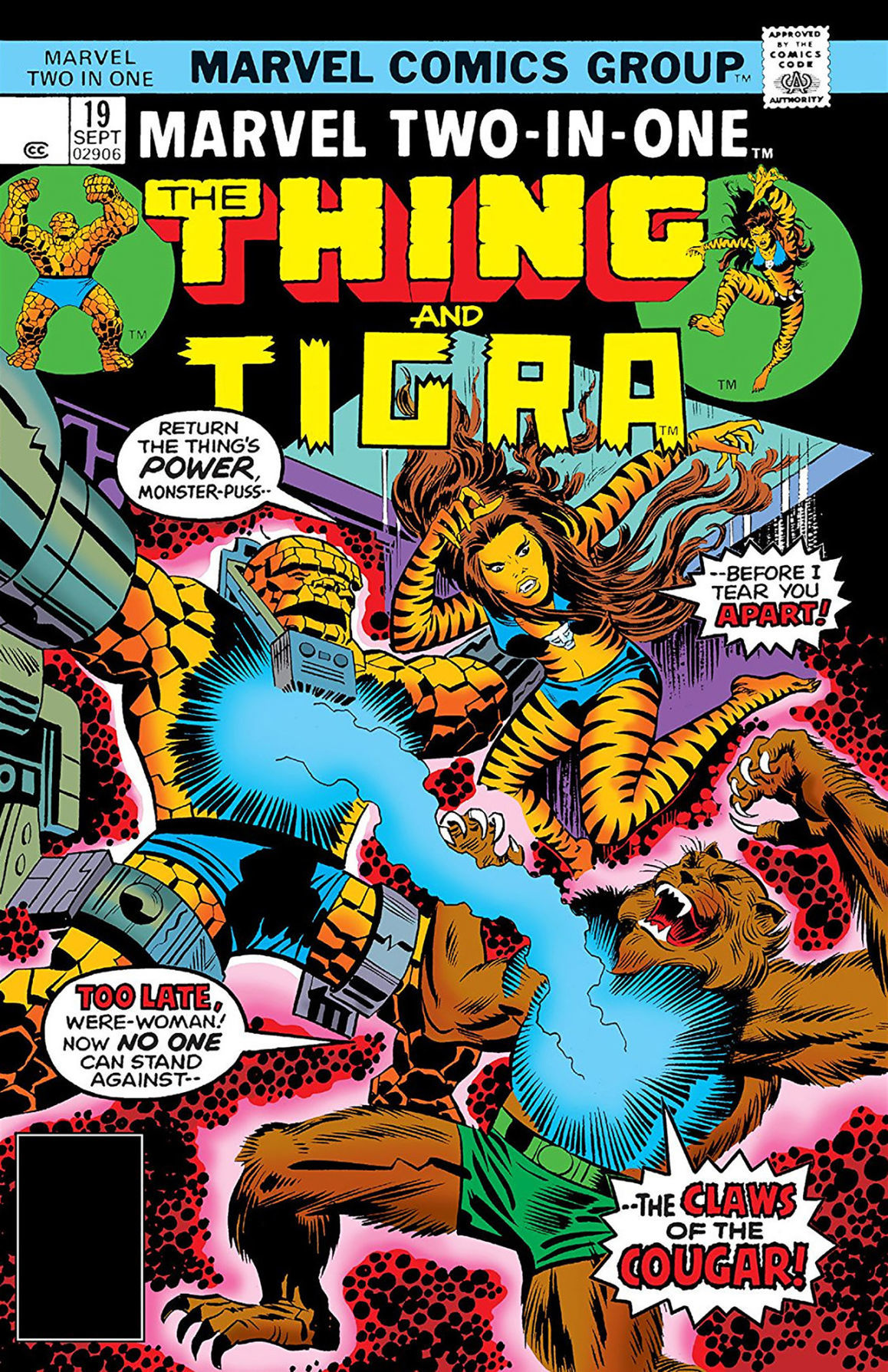 Tigra, shown here with The Thing of the Fantastic Four and a bad guy named Cougar, started out in a traditional super-suit, but eventually became a were-cat. Art by Jack Kirby.

Marvel Comics fans will immediately recognize that as the battle cry of Howard the Duck, whose combat strategy generally consists of running away, tail feathers held high as he advances in the opposite direction. And he's coming to a TV near you.

We should not be surprised. Comics have been taking over the small screen for some time now.

2019 is certainly a high point, with dozens of comics-related shows premiering or returning. In February, alone, the boob tube offers "Arrow," "Black Lightning," "Deadly Class," "The Flash," "The Gifted," "Gotham" "Riverdale," "Supergirl," "The Walking Dead" and the debuts of "Doom Patrol" and "Umbrella Academy."

There are at least 20 more comics-related shows scheduled in the coming 10 months, from the debut of "Swamp Thing" to the second season of "Sabrina."

That's not counting three live-action Marvel shows already announced to debut on Disney+, the streaming service due to launch before the end of the year. Those shows, whose premiere dates have not been announced, are "Loki" (starring Tom Hiddleston), "Vision and Scarlet Witch" (Paul Bettany, Elizabeth Olsen) and some sort of Falcon/Winter Soldier buddy show (Anthony Mackie, Sebastian Stan).

And now there's more. On Feb. 11, Hulu announced at the Television Critics Association Winter Press Tour that it will air five animated shows based on Marvel Comics. As reported by outlets such as The Hollywood Reporter and Gizmodo, those shows include "Hit-Monkey," "Howard the Duck," "M.O.D.O.K.," "Tigra & Dazzler" and "The Offenders."

You can be forgiven if most of those names are unfamiliar. Hulu — which will be majority owned by Disney after the entertainment behemoth's acquisition of Fox becomes final — has dug deep in Marvel's toy box to bring blinking into the light some really oddball characters.

Let's examine them one-by-one, starting with each show's official descriptions:

"'Hit-Monkey' tells the tale of a wronged Japanese snow monkey, mentored by the ghost of an American assassin, as he cuts a wide swath through the Tokyo underworld in this darkly cinematic and brutally funny revenge saga. Writers Josh Gordon and Will Speck will executive produce."

There's not much more to say about this obscure character, who has only made about 30 appearances since his 2010 debut in the "Hit-Monkey" No. 1 one-shot. Basically, he's a really good assassin who happens to be a macaque. In the comics, he learned his skills by watching a fugitive human assassin practice his craft and became the Simian Avenger when bad guys killed the assassin and Hit-Monkey's entire tribe.

"'M.O.D.O.K.' centers around an egomaniacal supervillain with a really big head and a really little body, who struggles to maintain control of his evil organization and his demanding family. Writers Jordan Blum and Patton Oswalt will also executive produce."

M.O.D.O.K. debuted fully formed in a 1967 Captain America story, but eventually his back story was revealed. George Tarleton, a technician at Advanced Idea Mechanics (A.I.M., as seen in the "Iron Man" movies) was transformed into M.O.D.O.C., a Mental Organism Designed Only for Computing.

But George was a bad egg, and soon took over A.I.M., re-naming himself M.O.D.O.K. That stands for Mental Organism Designed Only for Killing (although sometimes the "M" stands for "Mobile" or "Mechanical").

Given that comedian/actor Patton Oswalt ("Agents of S.H.I.E.L.D.," "Happy!") is involved, we should probably expect a Mental Organism Designed Only for Silliness.

"Howard the Duck is trapped in a world he never made, but America's favorite fighting fowl hopes to return home with the help of his unstoppable gal pal Beverly before the evil Dr. Bong can turn him the crispiest dish on the menu. Writers Kevin Smith and Dave Willis will also executive produce."

After the astoundingly awful 1986 movie adaptation, it takes a brave man to take seconds on the Master of Quack Fu. Evidently, Kevin Smith ("Clerks," "Comic Book Men") is that man. God help him.

"'Tigra & Dazzler Show' is a story about two woke superheroes and best friends, Tigra and Dazzler, as they fight for recognition among powered people who make up the eight million stories in Los Angeles. Writers Erica Rivinoja and Chelsea Handler serve as executive producers."

This one's a head-scratcher. These two characters have almost nothing in common, except for devolving from serious super-heroines into (mostly) jokes.

Dazzler debuted in "Uncanny X-Men" in 1980, a mighty mutant combining a number of fads of the time: Disco, roller skates and weird eye makeup. Dazzler (real name Alison Blaire) could transform sound vibrations into energy, which is an awesome power, but she mostly used it for light-shows at her concerts where she sang, presumably, Donna Summer covers.

She had a comic book for a while, where she once battled (in circumstances too implausible to relate) Galactus. Oh, and Doctor Doom. Nevertheless, her inherent ridiculousness eventually consigned the character to limbo, despite numerous and sincere efforts to update her in various X-books.

Tigra had a straightforward and traditional origin: Greer Grant Nelson drank a secret serum that gave her cat powers, in order to avenge her dead police officer husband, in the very first issue of her very own comic book, "Claws of the Cat" (1972). But alas, Greer wasn't destined for the straightforward and traditional superhero path, because her book was canceled with its fourth issue due to low sales.

From that point on, things got very strange for Greer, relegated as she was to supporting-character roles. She began appearing in various Avengers titles, where her origin was expanded to include Cat People, demons, Cat People who were actually demons and various bodily transformations. She gained the power to become orange and furry, a true werecat with a magic medallion to change back and forth.

Unfortunately, she also had a Cat Person soul at war with her human soul. This resulted in some mighty silly cat behavior, including seducing a bunch of male Avengers (at the same time) and chasing mice. Again, numerous and sincere efforts to rehabilitate the character into something marginally less ridiculous have been tried, mostly without success.

So, yeah, it's kinda tough to guess how this one's gonna go.

"'The Offenders' follows MODOK, Dazzler, Tigra, Hit Monkey and Howard the Duck as they are all forced to team up in order to save the world and certain parts of the universe."

Remember how on Netflix, after Daredevil, Iron Fist, Jessica Jones and Luke Cage all got their shows, they all teamed up for a one-off miniseries, "The Defenders"? Same thing here, only with the wacky turned up to 11.

I think I got it right the first time. Waughhh!