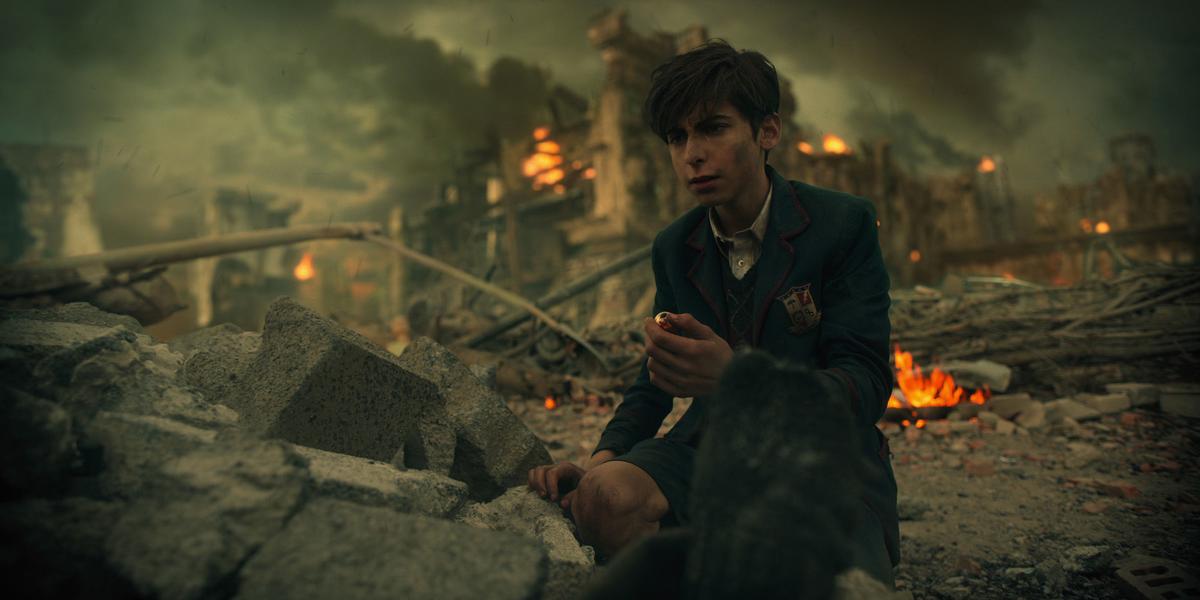 No. 5 (Aidan Gallagher) learns of the impending apocalypse when he travels to the future. 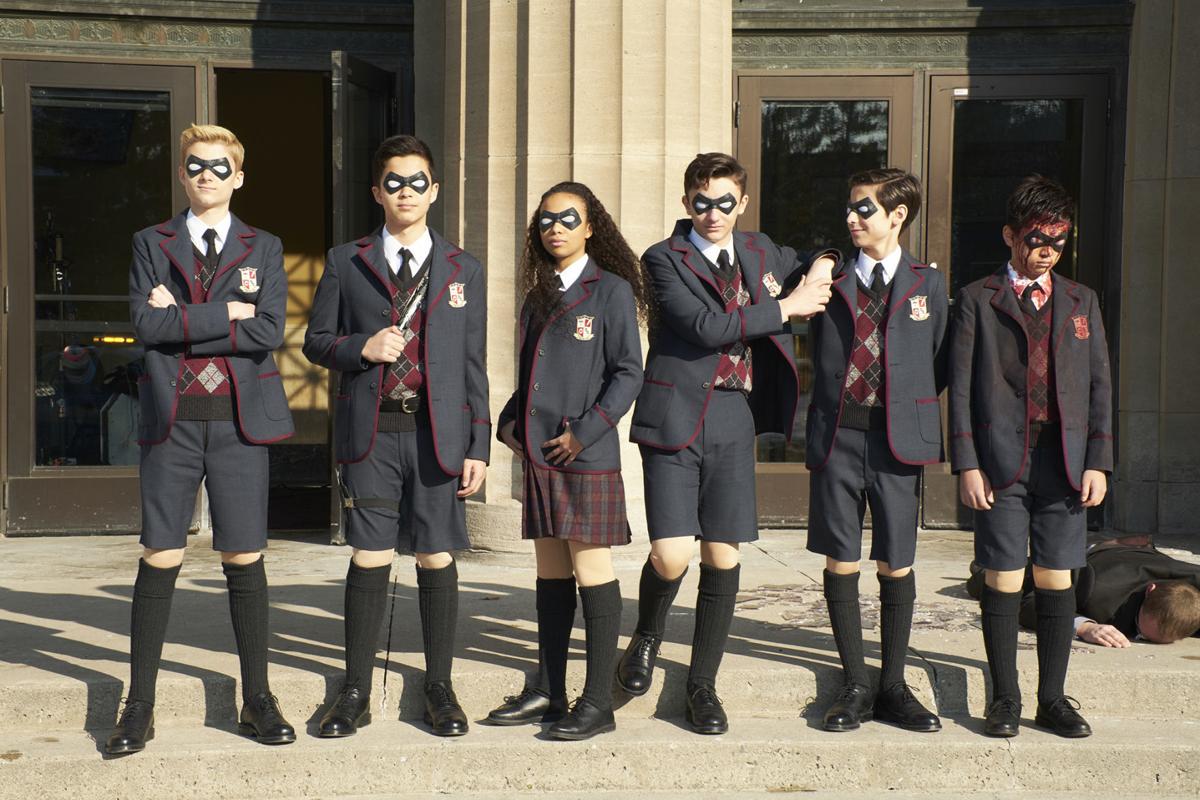 Six of the seven children adopted by Sir Reginald Hargreeves became the superhero team "The Umbrella Academy" as youngsters. It’s hard to find a picture of them all together as adults. Luther (Cameron Brodeur) (From left), Diego (Blake Talabis), Allison (Eden Cupid), Klaus (Dante Albidone), No. 5 (Aidan Gallagher) and Ben Hargreeves (Ethan Hwang). 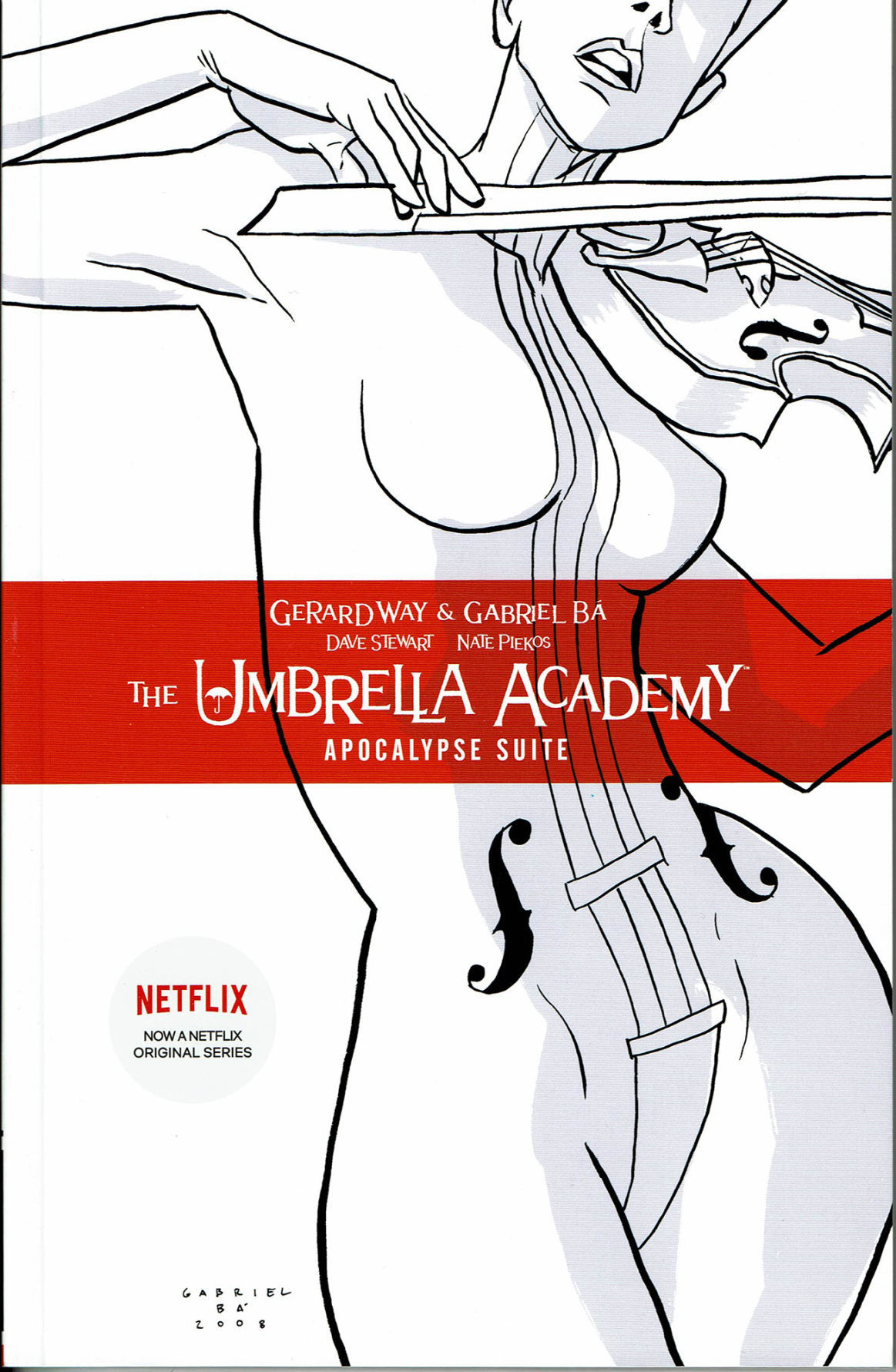 Vanya appears as The White Violin on the cover to Dark Horse's trade paperback collection of "The Umbrella Academy: Apocalypse Suite."

No. 5 (Aidan Gallagher) learns of the impending apocalypse when he travels to the future.

Six of the seven children adopted by Sir Reginald Hargreeves became the superhero team "The Umbrella Academy" as youngsters. It’s hard to find a picture of them all together as adults. Luther (Cameron Brodeur) (From left), Diego (Blake Talabis), Allison (Eden Cupid), Klaus (Dante Albidone), No. 5 (Aidan Gallagher) and Ben Hargreeves (Ethan Hwang).

Vanya appears as The White Violin on the cover to Dark Horse's trade paperback collection of "The Umbrella Academy: Apocalypse Suite."

Once again, a great comic book an even better TV show — without slavishly following the source material. “The Umbrella Academy,” currently streaming on Netflix, tells the same story as the comics in broad strokes, but makes subtle changes to take advantage of the new medium.

“The Umbrella Academy” began, of course, at Dark Horse Comics — a brilliantly weird book by writer Gerard Way (frontman for My Chemical Romance) and artist Gabriel Bá (“B.P.R.D. 1947,” “Daytripper”). The first six-issue miniseries, “Apocalypse Suite,” appeared in 2007, and has been followed by “Dallas” and “Hotel Oblivion.”

“Umbrella Academy” tells the story of seven super-powered people who were among the 43 children who were mysteriously born simultaneously to nonpregnant women in 1989. Eccentric billionaire, explorer and inventor Sir Reginald Hargreeves adopts the seven — whom he numbers, instead of names — to forge a superhero team to “save the world, of course.”

Among the many changes the TV show makes is to de-emphasize the superhero aspects of the comic book. This is a wise move. Superheroes and science fiction in general work great in comics, where there is no budget on the special effects and over-the-top is the order of the day.

That doesn’t work so well on TV, where there is a budget to limit F/X, and super-costumes tend to look ridiculous. But what TV has that comics don’t is actors — actors who can convey characterization in a wink or a gesture or a few lines of dialogue that it takes comics miles of pages to do.

Take, as a case in point, the first episode of “Umbrella Academy,” where one of the seven plays “I Think We’re Alone Now” on an old-timey record player, and all of them begin dancing. But they dance to “Alone” — that word by itself conveys a lot — in separate rooms, each doing an individual dance. That single scene, with actors and music, told us everything we needed to know about how isolated these characters were and what they did — and did not — have in common. They were seven individuals who had grown up together, but had failed to form a family.

Speaking of music, “Academy” uses a lot of it expertly to convey information, to inform mood and sometimes just because it’s fun. They sample from various eras, and the selection is uniformly excellent. From “Hazy Shade of Winter” (The Bangles) to “Istanbul (Not Constantinople)” (They Might Be Giants) to “One is the Loneliest Number” (Three Dog Night) to “Dancing in the Moonlight” (King Harvest), the songs are emotionally evocative, scene-appropriate and dance-inducing.

Meanwhile, the show takes the basic premise of the comic book, but tells it in a different way. The easiest way to convey that — and with Spoiler Warnings Ahoy — is by looking at how each of the major characters was altered for TV:

Sir Reginald Hargreeves: In the comics he is an alien — which alone might explain why he’s such a sorry excuse for a father to the seven children. The TV show only makes an allusion to this, in an otherwise inexplicable scene where a young Hargreeves is shown at the bedside of a dying woman (his wife, if that arrangement exists on other worlds), but then releases some sort of pixie dust to the air as rockets are shown leaving a bizarre city on an alien planet.

00.01: The leader of the “Academy” kids is “No. 1,” although one wonders how he was assigned that role, given how lousy he is at it. Perhaps it’s because of his size and super-strength, as that might be intimidating to someone else trying to give him orders. At any rate, Hargreeves is forced to extreme measures to save his life after a mission goes bad. In the comics it is implied his head has been grafted onto a gorilla body, whereas on TV he is given a serum based on simian physiology. In both cases, he becomes rather ape-like below the neck.

No. 1’s superhero name is Spaceboy in the comics, and he routinely uses a rocket pack and ray gun. The other characters usually refer to him as “Spaceboy” or “Space.” All of that is ditched on the TV show, and the others refer to him by his given name, Luther. (Although who gave him and the others their names is unclear.) Luther is portrayed by Tom Hopper, who gives this none-too-bright character — who in lesser hands would have been played for laughs — a sad, somber stoicism.

00.02: Diego does a bad Batman impression in both incarnations. His “Commissioner Gordon” is Eudora Patch on TV, but in the comics it is Inspector Lupo, a grumpy old detective whose partner is an intelligent chimp. Patch is an invention for TV, who serves to broaden Diego’s characterization significantly from the comics, where he is somewhat one-note.

Also in the comics, Diego is usually referred to by his superhero name (The Kraken), and he is secretly in love with Vanya. Neither element seems to have made the transition to TV. David Castaneda walks a fine line between a funny Batman parody and a literal No. 2 who, like the old Avis commercial, is trying harder.

00.03: Once again, the comics make use of this character’s superhero name (The Rumor) more than her given name (Allison). Otherwise her function and fate are much the same. Emmy Raver-Lampman’s performance makes the character more memorable and sympathetic than her comics counterpart.

00.04: Called The Seance in the comics, Klaus dresses in black and speaks rarely and sardonically, in line with his morbid ability to commune with the dead. He is also a powerful telekinetic, an ability which doesn’t appear in “Umbrella Academy” season 1.

But what doesn’t appear in the comics is Robert Sheehan’s hilarious and scene-grabbing performance, transforming No. 3 from a background Goth character into a frenzied, gay drug addict who drives both scenes and narrative. In both media Klaus turns to drugs to numb himself from the wailing of the dead, but it’s on TV where that necessity is brought to life — or larger than life, really.

00.05: In both media No. 5 has no other name, and is an old man in a 13-year-old’s body who knows of the coming apocalypse because he spent decades in the future. He is, of course, the most mature and ruthless on the team, which plays hilariously against his appearance. Actor Aidan Gallagher is a marvel in the role, playing a convincing adult without clumsy affect — and in his actual teenage body.

The TV show dives feet-first into No. 5’s former employer, the Commission, inventing a great deal of material that doesn’t exist in the comics. In fact, readers don’t learn much at all about them, or meet Hazel and Cha-Cha, until the second six-issue series, “Dallas.”

00.06: Alas, poor Ben — “The Horror” in the comics — is dead in both media. At least on TV Justin Min gets to bring him to life as Klaus’ conscience and in flashbacks, plus a surprise action sequence (of sorts) in the final episode.

00.07: Vanya follows the same path from forgotten sibling to The White Violin in both media. But it’s relatively abrupt, and somewhat unconvincing, in the comics. On TV, Ellen Page — the maestro of misery, the sensei of sadness — makes her story far more believable. Even as a killer, she remains sympathetic.

In the comics, she is mentored into super-villainy by The Conductor and his Orchestra Verdammten, about whom we learn almost nothing. The introduction of Leonard Peabody (John Magaro) as her Iago is an insightful change.

Not that “Apocalypse Suite” isn’t worth reading. I only emphasize its faults here to contrast them with the TV show’s clever alterations. And I’m not the only one who feels that way.

“I believe in the medium of comics so much,” Way told Collider, “that I set out to make a really great comic, and that was it. But I’m a visual thinker, so I could also see this stuff, visually, not beyond a comic, but as moving images. So, I was extremely nervous (about the TV show). I wasn’t sure if they would be able to capture it, and they did.”

In the same interview, Ba said much the same: “They kept the essence of the characters. They have fresh ideas for everyone and the story, which are great and fit in, and add up to this whole, if you can call it, mythology.”