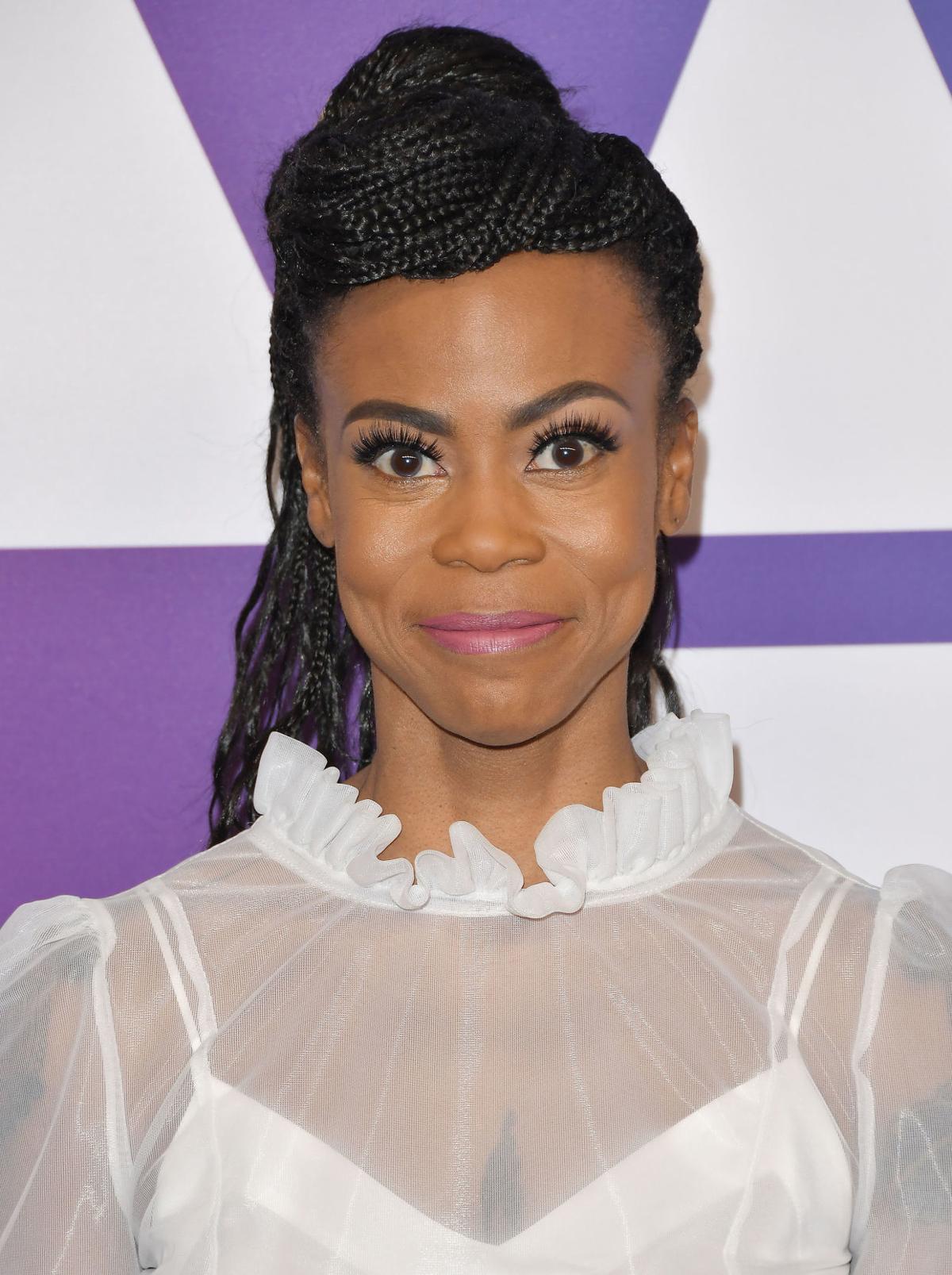 Hannah Beachler’s work on “Black Panther” broke boundaries in a variety of ways. Read about it at TelegraphHerald.com/

Hannah Beachler’s work on “Black Panther” broke boundaries in a variety of ways. Read about it at TelegraphHerald.com/

Hannah Beachler’s introduction to the high-stakes world of “Black Panther” was a lot less glamorous than one might expect for the relatively new production designer, now an Academy Award nominee for her work on the box-office record breaker.

The 48-year-old, with just six years in the field under her belt, says she put everything she had into the presentation — including all of her money.

“Because I wasn’t staying at a hotel or anything — I was sleeping on couches — I had to change my clothes in the parking garage,” she says over the phone from the Ohio set of the upcoming Todd Haynes drama “Dry Run.” “I’m in my car trying to put this dress on and kicking my shoes out the door and I’ve got my stuff hanging out and it was ridiculous.”

Armed with a 400-page pitch and a 4-by-8-foot board plastered with references and illustrations, Beachler won over Marvel executives, who called her pitch an immediate winner. Even so, she didn’t expect to hear back about the studio’s decision for at least two weeks. Instead, she got a call from director Ryan Coogler the following morning confirming she’d gotten the job.

“I just screamed full force into the phone,” she says with a laugh. “He was laughing, and I screamed, ‘I’m on the 101.’ I’d pulled over on the highway. And I cried a little and screamed a lot. He was like, ‘This is going to be great. I’m so excited, and we’re going to have a lot of fun.’ And I just kind of sat and cried like, I can’t believe this just happened.”

Despite Coogler’s confirmation, Beachler’s agent cautioned her to wait for Marvel to verify the news because it was well known that the studio was looking to fill the role with a “big fish.”

In fact, when Coogler initially pitched the idea of hiring Beachler in an early meeting with Marvel, the studio wasn’t convinced.

“They were like, ‘Whoa! Production design here is a thing,’” he told The Times last February. “It wasn’t a ‘no,’ but they wanted to meet her. As soon as they said that, I was good because I knew she’d come in and blow their minds. You can’t meet her and not hire her.”

Beachler, who previously collaborated with Barry Jenkins on the Oscar-winning “Moonlight” and with Beyonce on the Emmy-nominated “Lemonade,” had worked with Coogler twice before — on his 2013 breakthrough “Fruitvale Station” and 2015’s “Creed.”

When Coogler took the job that would become 2018’s highest-grossing movie, he was able to bring along two key members of his “Fruitvale Station” crew — Beachler and cinematographer Rachel Morrison, who, in 2017, became the first woman nominated for a cinematography Oscar with “Mudbound.”

Beachler, the first woman to serve as a production designer on a Marvel film, is now also the first African-American to be nominated for an Academy Award in the category. She has already nabbed an Art Directors Guild award and a Critics Choice Award for her work on “Panther.”

“It means a lot and there are so many different layers to it, I think,” she says of her Oscar nod. “First off, it’s an honor just to be nominated for anything, especially for this project. And then it’s excitement and like, wow. A little-kid feeling almost. I’m just constantly feeling something different every day. Sometimes I walk down the street and stop and do a dance. I wake up some mornings and think about it and have tears in my eyes about the whole thing and what it means to me.

“You want to be at the top of your field, and I feel like an award like this, recognition like this, puts you there,” she adds. “And then the idea that I’m the first African-American — in 91 years — to be nominated for such a craft is sort of mind-boggling. Like, it is 2019.”

Beachler calls the recognition “sobering” and hopes it will influence producers and filmmakers to hire her and other designers of color for more mainstream opportunities.

“It’s a very serious thing,” she says. “My thought is I have to harness this moment and turn it into more … I can’t just let it slip away and become a big nothing after.”

Though Beachler knew “Panther” would perform, she couldn’t predict just how profoundly it would seize the zeitgeist.

“When you’re working on a Marvel film, you know that there’s a built-in audience and that it will be successful,” she says. “I mean, when you make something that big it’s like, it better be.

“Ryan and I and everybody all just wanted to make a really good film. It was never an expectation that it would ever be what it was, what it became, what it is, I should say. It’s a cultural moment. I will always feel speechless about it, and I’m always so grateful that I was a part of it.”

Having worked together before, Coogler and Beachler managed to build a friendship over the years that she compares to family.

“I knew exactly what Ryan was going to do,” she says. “I didn’t know what the story was going to say, but I knew that it would touch many people. Ryan can tell you a story and make you laugh and cry within seconds of each other. He can talk to you and you’re the only person he’s talking to.

“He has a light that shines very brightly and that attracts people,” she adds. “That’s why I love Ryan; he sees things in such a way that you’re always awestruck. I always tell people he comes from the sun. So I knew going in that this was going to be a different superhero film than anyone has ever seen. So much so that they don’t even know to categorize it that way.”

One of the biggest challenges in constructing the highly detailed world of Wakanda (culled from the cultures and traditions of several African countries) was the time restraint, Beachler says.

“You find yourself doing the research, and you start, and then, it keeps going,” she says. “I wish I had another year of research on it. But we had a lot of time I was on it for 13 months.”

As the first superhero film to feature a predominately black cast and setting, Beachler felt a huge sense of responsibility to get the details of the fictional African country just right.

“It was like I had to go 100 extra miles on this,” she says. “I had to do it for the community. I had to represent something that’s been misrepresented for my entire lifetime and show an African country that, if they had control of their own resources and were not colonized, this is the potential. This is what it could’ve been. This is what we could’ve been, (but) we were never given that opportunity.”

Beachler was raised by an interior designer mom and an architect dad in Centerville, Ohio, a background that significantly impacted her decision to pursue production design.

“Our home was always based on what was happening in our house at the time emotionally, psychologically,” she says. “Where my mom was or where my dad was in their lives or how much money they had or how many kids were born at the time because there’s a bunch of us. So I understood at an early age that design has to do with people.”

Beachler adds that working with black artists can be “healing,” particularly on “Panther.”

“We asked ourselves a lot of hard questions on this film. It was, ‘What is it to be African? How do we reconcile African and American?’ So you’re learning about yourself and how you feel about certain things because you have to put yourself in it. But as artists, if we don’t hold the mirror up, who will?”

Being a black woman in a white male-dominated industry comes with its share of challenges, Beachler says.

“It’s always difficult for a female, period, end of story,” she says. “It is even more difficult for a black female. Almost unheard of. Especially moving up through the art department, there weren’t a lot of other black female designers. I had to fight the stereotype of the black women attitude thing. But in any industry, I’d have to prove myself, so that was just par for the course. It’s not as if people didn’t say things to me and I didn’t get discriminated against. I can remember one time when I first started out and the designers were introducing themselves to all of us. I was the last one and it gets to me and he’s like, ‘Oh, you’re black. That won’t last long.’ So those things? All day, every day.

“But I never listened to it; I used it as a push to work hard. I just dug in more.”