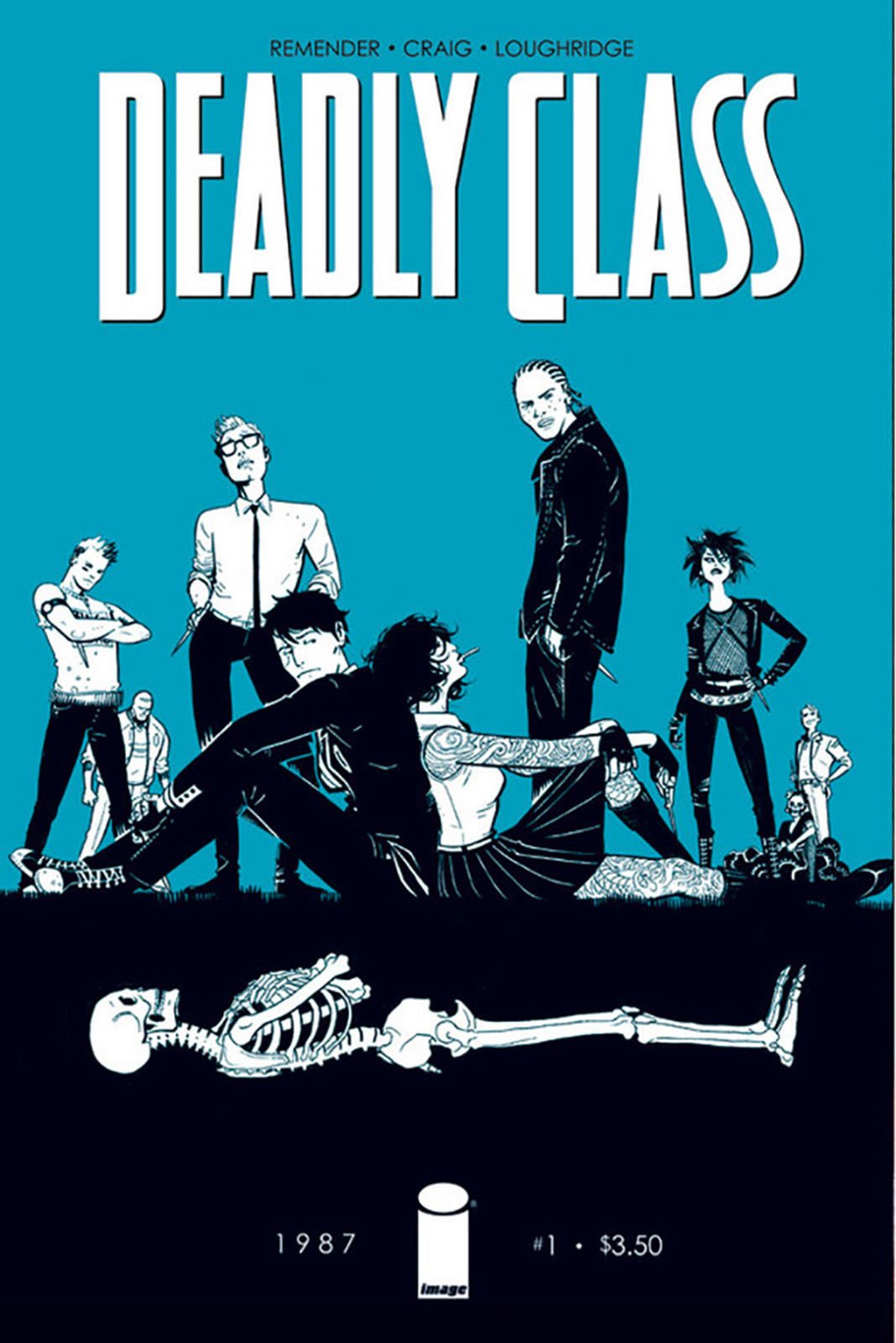 "Deadly Class" debuted at Image Comics in 2014, written by Rick Remender and illustrated by Wes Craig. 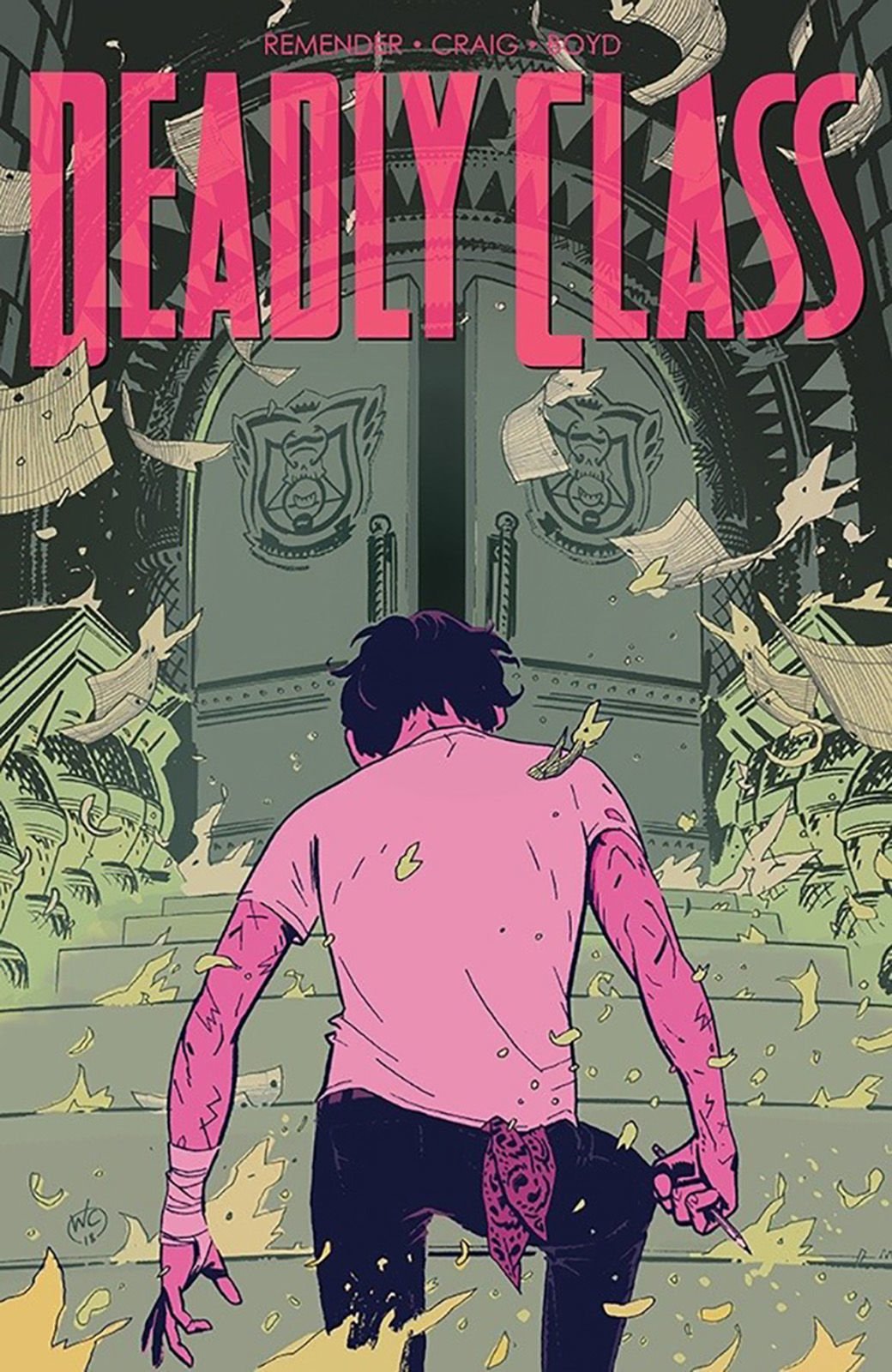 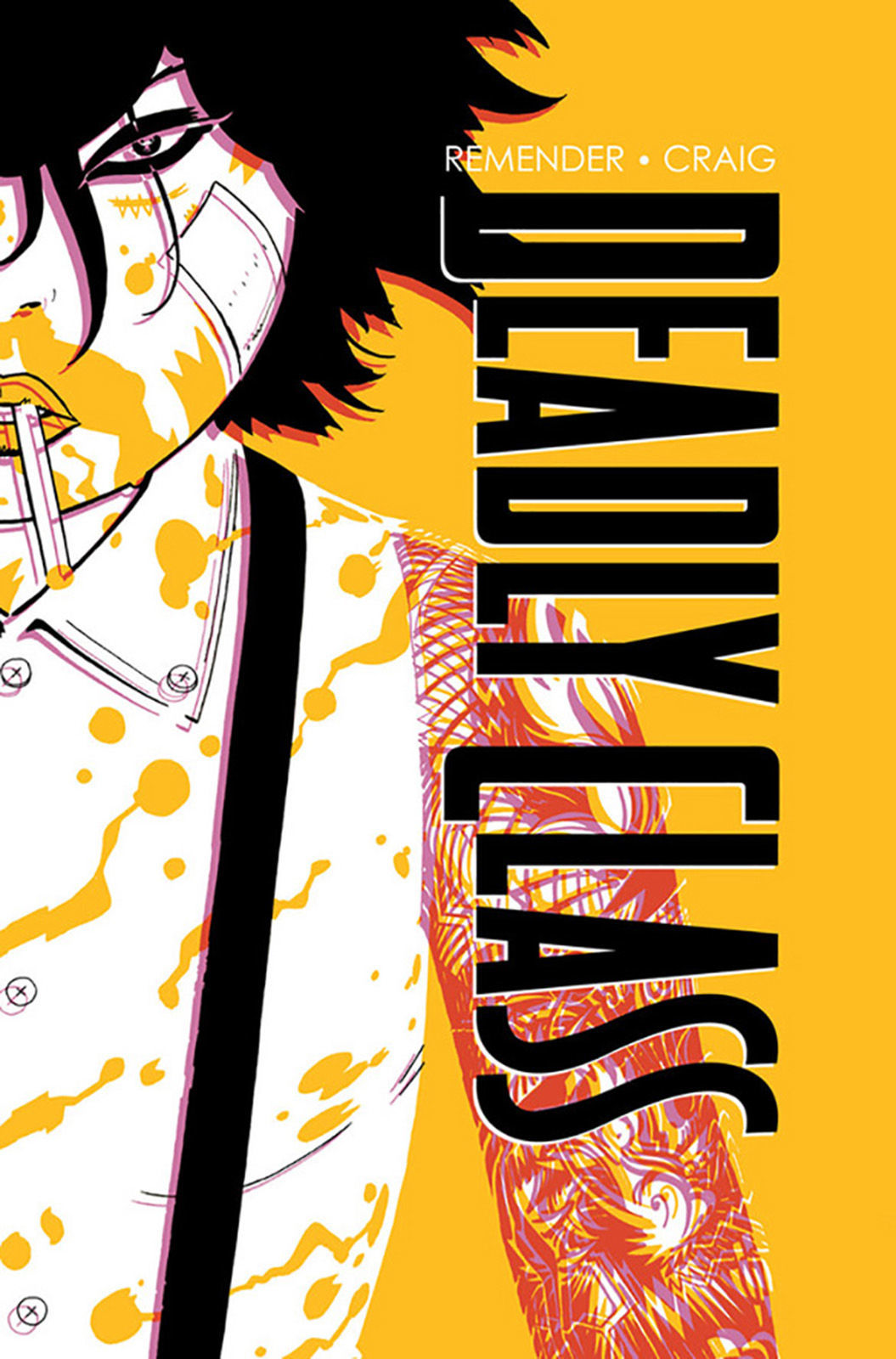 "Deadly Class" is available in both trade paperback and "Deluxe" hardback collections. This is the cover to "Deadly Class Deluxe Edition Book 2: The Funeral Party."

"Deadly Class" debuted at Image Comics in 2014, written by Rick Remender and illustrated by Wes Craig.

"Deadly Class" is available in both trade paperback and "Deluxe" hardback collections. This is the cover to "Deadly Class Deluxe Edition Book 2: The Funeral Party."

“Deadly Class,” which arrived as an ongoing series on Syfy Jan. 15, is that rare critter: A comics-based TV show that improves on its source material.

These changes were evident in the pilot, which aired online as a preview in December, and then aired again as the show’s premiere Jan. 15. While the look and the feel of the show is very in line with the energy of the comics, some major elements differed in surprising — and effective — ways.

Set in the 1980s San Francisco, “Deadly Class” focuses on Marcus Lopez Arguello, a street kid who is inducted into the shadowy assassin high school, Kings Dominion Atelier of the Deadly Arts. Marcus was orphaned at a young age because Barbara Salinger, a suicidal schizophrenic, jumped off a bridge (on TV it’s Coit Tower) and landed on his parents.

From there he went to an orphanage, where he was abused and forced to work in a sweatshop. Marcus escaped during a lethal fire for which he is blamed and is wanted by the police. Marcus blames it all on Ronald Reagan, due to the then-president’s policies to deinstitutionalize the mentally ill, which put his parents’ killer on the street.

So far, so good — both comic book and TV show set up this essential premise. And both platforms establish an irony essential to the show’s viewpoint — that regardless of the circumstance, high school is high school, where social cliques form that keep the have-nots at the bottom of the totem pole. That’s some pretty decent social commentary dolloped into our coming of age-slash-action/adventure TV show.

Or is it all one thing?

In the foreword to “Deadly Class Book 1: Noise Noise Noise,” David Lapham (“Stray Bullets”) writes that the action/adventure is a metaphor for the angst of high school. “(Writer) Rick Remender has dug into his personal bag of horrors … and brought us … a high school for assassins which, except for a little killing here and there, is just like a regular school. In fact, if you read all the killing as a physical expression of a mental and emotional state of mind, it really is high school, which is enough.”

The book itself is narrated by Marcus, and Remender achieves terrific verisimilitude when it comes to the mental and emotional turmoil, self-obsession and pseudo-intellectualism of the teenage mind. Take Marcus’ assessment of Kings Dominion on his first day, much of which was lifted for the TV show:

“I already hate this place,” he thinks. “Sea of sour faces. Desperate to sell how above-it-all they are. Poseurs. All of them instinctively striking the same disaffected front. All too stupid to see how obvious and preprogrammed it is. Worried about being cool. Worried about going against their clan’s etiquette. Just doesn’t matter where they’re from kids are all the same — vicious.”

However, that brings up one difference between print and screen: The TV show can’t be narrated constantly by Marcus, nor would we want it to be. Instead, unique scenes and dialogue are used to establish characterization.

In the comics, Marcus and Willie Lewis bond over a roof-jumping exercise. In the show, Willie (Luke Terrie) recruits Marcus to help him with his murder assignment. Bonding occurs as the two argue over the 1980s comics. Willie champions the "X-Men" books of the time, citing the Dark Phoenix Saga by Chris Claremont and John Byrne (coming to a theater near you Friday, June 7). Marcus is an indie fan, mentioning Bob Burden’s “Flaming Carrot” and Howard Chaykin’s “American Flagg!” as examples. (As a survivor of the ‘80s, I can stipulate that they’re both right.)

Another unique-to-TV scene is the confrontation between Chico (Michel Duval) and Marcus over Maria (Maria Gabriela de Faria). The two boys clash in the comics, but only on TV do we see the courtyard clash — and get concrete evidence of Maria’s manipulation.

Both elements are present in the comics, but seem to enjoy less emphasis. Instead, we get a lot more teenage angst from Marcus, which makes him act out and, at times, be a little hard to take.

Even the other characters think so, at least in the third story arc, at a time when Marcus is isolated and largely despised at the school.

“You’re weak and poisonous,” says his dream girl Saya Kuroki. “Stay the (bleep) away from us.”

Given Marcus’ actions in the comics, it’s hard to argue with her. And perhaps those actions will repeat on the TV show, too. But it’s hard to imagine the audience turning against TV’s Marcus, played with charm by the affable Benjamin Wadsworth. And let’s hope they don’t — if the comic book has a flaw, it’s that it’s sometimes hard to find anyone to root for.

Speaking of actors, the show chose the inestimable Benedict Wong to play the ruthless headmaster, Master Lin. Wong — familiar as a different Wong in “Dr. Strange” and Kublai Khan in “Marco Polo” — is an imposing presence, and his menace is palpable. He steals every scene he’s in. That stands in stark contrast to the comics version, where Lin is depicted as a wizened, spindly old Asian man who is more stereotype than character.

Another change — and it’s a big one — is the sequence of events surrounding the first assignment in AP Black Arts class. On TV, Master Lin tells his students to “use your training. Search the city for a worthy target. Someone you think deserves to die. And kill him.”

In the comics, however, it’s another teacher who makes the assignment, and he specifies that the target be a vagrant. That narrows the range, which is almost needful, due to how it plays out.

On TV, the target is obvious: Rory (played by Ryan Robbins), a bully who ruled Marcus’ hobo camp with brutality and lethal violence.

“It was an open secret in camp,” Marcus says in his voiceover. “If anyone went missing, we knew who did it. And eventually he stopped hiding the bodies.”

But it’s a lot more complicated in the comics. Marcus and “lab partner” Willie target a different vagrant,

“Creepy Daniel,” whom they located via the comic book Rory, one who’s a lot more sympathetic than his TV counterpart. But they fail at that, and end up killing Rory, in the belief that he committed war crimes in Vietnam.

That turns out to be false, and the pair fail their assignment. Meantime, the crimes they attributed to Creepy Daniel turn out to have been committed by yet another character, Chester Williams. Marcus knows him, because they were roommates at the orphanage, and it was Chester who started the lethal fire for which Marcus is blamed.

Chester’s face is now damaged — presumably by the fire — and he hangs out with a group of inbred killers in a trailer in the Tenderloin district. Chester, who is a truly despicable character, has been stalking Marcus, planning on a suitable revenge for the guy who “stole” his rep as a child-killer.

Chester intervenes in an intramural conflict among the students, and commits an act that forces Marcus and his schoolmates to find him before Master Lin discovers their extra-curricular activities. That brings the Tenderloin’s hillbilly killers and the school’s wannabe killers into lethal conflict, which complicates everyone’s lives quite a bit.

Some of that must find its way onto the TV show, or the major acts of the second and third story lines can’t happen. But it will be simpler and more streamlined, in that we’ve already dispensed with Creepy Daniel altogether.

These differences aren’t arbitrary, nor are they insultingly unfaithful to the comic book. I say this with some confidence, because Rick Remender — the co-creator (with artist Daniel Craig) and writer of the comic book — is also a co-creator of the TV show, and serves on the show as an executive producer and a writer.

Syfy even released a video of cast members discussing Remender’s tremendous influence on the show.

“He sent us playlists, music to listen to for our characters, documentaries,” said Tennie.

“He even likes to ask us questions,” said de Faria. “Like, ‘What do you think Maria would do here?’ ”

The upshot is that both TV and comics tell the same story, but emphasize different elements to take advantage of each medium’s strengths. It’s the best of both worlds.

I mean, if you don’t mind a little murder with your teen drama.