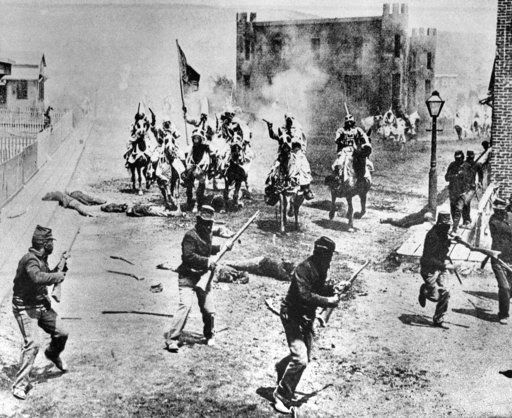 This 1914 file photo shows a scene from D.W. Griffith's "Birth of a Nation" movie depicting Ku Klux Klan members riding horses against soldiers, filmed in the Hollywood section of Los Angeles. The groundbreaking 1915 film, widely regarded as one of the most corrosively racist ever made, is viewed ever more harshly as the years pass. 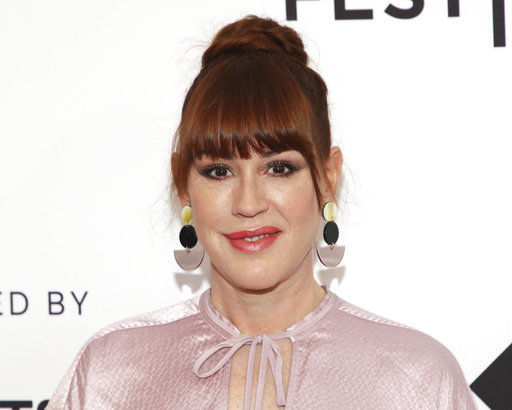 Actress Molly Ringwald attends a screening during the 2018 Tribeca Film Festival in New York. In John Hughes’ “Sixteen Candles,” Ringwald played Samantha Baker, the movie's adolescent love interest. She has since grown somewhat uncomfortable with some of the material that made her one of the 1980s’ biggest young stars. But, as she says, “Erasing history is a dangerous road when it comes to art." 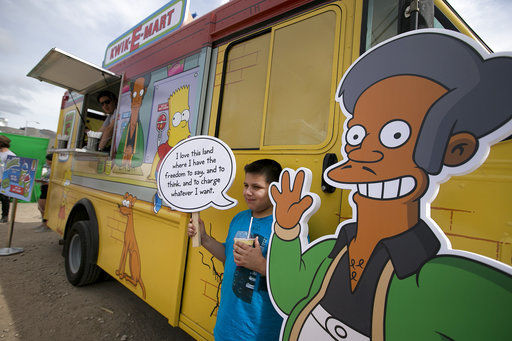 Old favorites and outdated attitudes: What do with problematic media when it ages ungracefuly. Read about it at TelegraphHerald.com/the_mouth.

NEW YORK — They are fighting, yes, but the fight crackles with the enticing electricity that only Cary Grant and Katharine Hepburn could deliver. He is storming out the door. She is throwing his golf clubs after him. The music is jaunty. He is charmingly irritated.

Then: He strides up to her, throws a fake punch in the air at her, opens his fist and shoves his palm into her face, slamming her onto the ground. She looks up at him with what appears to be mild exasperation. She rubs her injured neck. The rom-com musical score plays on.

So begins 1940's "The Philadelphia Story": With a case of domestic assault played for laughs. Eight decades later, the movie is clearly two things: Uneasy fare for a post-#metoo culture and an enduring American classic.

They exist throughout society's pop culture canon, from movies to TV to music and beyond: Pieces of work that have withstood time's passage but that contain actions, words and depictions about race, gender and sexual orientation that we now find questionable at best.

Whether it's blackface minstrel routines from Bing Crosby's "Holiday Inn," Apu's accent in "The Simpsons," bullying scenes in "Rudolph, the Red-Nosed Reindeer," the arguably rapey coercion of "Baby, It's Cold Outside" and "Sixteen Candles" or the simplistically clunky gender interactions of "Mr. Mom," Americans have amassed a catalog of entertainment across the decades that now raises a series of contentious but never-more-relevant questions:

What, exactly, do we do with this stuff today? Do we simply discard it? Do we give it a free pass as the product of a less-enlightened age? Or, is there some way to both acknowledge its value yet still view it with a more critical eye?

Does American entertainment ever have an expiration date?

"How are we meant to feel about art that we both love and oppose?" Molly Ringwald, who played the "child" referenced above, wrote this past April in The New Yorker, 34 years later. As the decades passed, she grew more uncomfortable with some of the material that made her one of the 1980s' biggest young stars.

This can be a fraught debate and understandably so. Some Americans, often those who wield society's power, cast popular culture as froth that's unworthy of serious scrutiny: Hey, it's just entertainment. Don't overthink things.

But entertainment is a byproduct of its era — of how we view ourselves, of who gets to call who what and who wields the paintbrushes of representation in society. And if you're never the one holding the paintbrush, how entertaining can it be?

This delicate question pervades some of our culture's most beloved work, from Mark Twain's "Huckleberry Finn" on down. It is the wonderful and the problematic, often presented side by side.

So, if we're watching "I Love Lucy," do we consider how belittling Ricky (and most everyone else) is to her? Or do we take away the fact that no matter what, she never stops trying and is never contained? In "The Honeymooners," do we key in on the obvious love between Ralph and Alice or on his fist-shaking threats to send her "to the moon?"

If we're listening to the Beatles, and we adore John Lennon for his vision of a more peaceable world, what do we make today of his 1965 song that began with the lyrics, "I'd rather see you dead, little girl, than to be with another man?"

If we're showing our kids Hollywood classics, and we put "Gone with the Wind" in front of them, what do we say when Mammy (Hattie McDaniel) acts like a happy slave who adores her masters? What about the frequent racial and ethnic stereotypes — from Mexican to African-American to Irish to Italian — in Warner Bros.' beloved collection of cartoon shorts from the 1940s and 1950s?

For the Gen-Xers among us: Through what prism should we view such hormone-drenched 1980s fare as "Fast Times at Ridgemont High," "Porky's" and — heaven help us — "Zapped," an entire movie about a teenage boy who can pop open girls' blouses with his mind?

And what of Hughes, who captured teenage life's authenticity as never before but also handed us material that sent some fundamentally confusing and problematic sexual messages to adolescents?

"If you could erase all the scenes that are offensive to us today, even if you could, would that be a good idea? I don't really think so," says M. Alison Kibler, who teaches American studies at Franklin & Marshall College and researches how groups struggle for fair representation in entertainment.

She adds: "I would step back from any kind of one-dimensional read of movies and performances from the past."

"Woman not made for heavy thinking but should always decorate scene like blossom of plum." — Charlie Chan (a decidedly un-Asian Roland Winters), "Charlie Chan in the Chinese Ring" (1947)

The "Charlie Chan" movies of the 1930s and 1940s, shown repeatedly on TV in the 1970s and 1980s, seem today to brim with racial problems: Non-Asians portraying Asians, fortune cookie sayings spouted in precious accents and, for good measure, some broadly played African-American representations, too.

Yet, according to Yunte Huang, who traced the character's history, many Asians welcomed the films at the time because, in an era of Fu Manchu stereotypes, they represented something coveted: A respected Asian protagonist who outwitted every white person on the screen.

"There's a history to everything. And we need to know history — including those ugly representations and everything," says Huang, author of "Charlie Chan: The Untold Story of the Honorable Detective and His Rendezvous with American History."

"On the one hand, we need to be critical and continue to protest," he says. "On the other hand, it is important for us to get people to talk about this. Let them come out, but talk about them and analyze them so we know how far we have traveled."

Until the last couple decades, older fare resurfaced only sporadically when studios or networks put it back out there on air or VHS tape.

But the dawn of the digital era and the rapid rise of streaming culture means that now anything can be accessed by pretty much anyone on any screen. That in turn means a dizzying library of our cultural past, warts and all, is available at the press of a button.

This is also a different question than what's being grappled with around entertainers like Bill Cosby, Louis C.K. and Woody Allen, whose work many now reject because of the artists' behavior rather than the content itself (though many have identified problems in Allen's and C.K.'s work).

Consider Apu, the South Asian convenience store owner long voiced by Hank Azaria in "The Simpsons" — an unusual case because the show has spanned more than two generations of evolving attitudes.

Last year, comedian Hari Kondabolu released a film, "The Problem With Apu," documenting stereotypes he saw with the character and its effect on entertainers of South Asian descent. The response included hints that Apu might fade from the cast of thousands that populate the Simpsons' hometown of Springfield.

That doesn't sit right with Shilpa Dave, author of "Indian Accents: Brown Voice and Racial Performance in American Television and Film." Apu, after all, is also a beloved character and community member. Isn't there another solution?

"The easy thing is to point a finger and say, 'Oh, that's terrible.' But I think we have to say, what are the alternatives? How do we want to progress now that we have more information and a higher consciousness?" Dave says. "Does entertainment mean that we leave our brains behind?"

"I know those law books mean a lot to you, but not out here. Out here a man settles his own problems." — Tom Doniphon in "The Man Who Shot Liberty Valance" (1962)

When Tim Cogshell was a child, he loved John Wayne. He'd watch Westerns and root for the cowboys — the "good guys."

"Then my uncle told me, 'Stop rooting for the cowboys,'" Cogshell says, allowing that his uncle also used a word between "the" and "cowboys" that began with an "f."

Today, Cogshell, a film critic for FilmWeek on KPCC-FM, an NPR affiliate in Pasadena, Calif., thinks a lot about how yesterday's attitudes should be considered in today's environment. Part of his answer comes down to intent.

"I gotta know the details. What's going on here? What's the intention here?" Cogshell says. "Sometimes you have to peel the onion. And then one decides how to think about it, how to feel about it, where to put it in the canon."

So, while "Birth of a Nation," the groundbreaking 1915 film widely regarded as one of the most corrosively racist ever made, is viewed ever more harshly as the years pass, a misogynist bigot like Archie Bunker from "All in the Family" presents a different story: Whether a successful portrayal or not, Cogshell says, it was intended to highlight a problem and get it discussed.

Some of this discussion is perhaps moot. YouTube-savvy teenagers are probably not watching "Birth of a Nation," "The Mask of Fu Manchu" or even "Porky's" on their mobile devices.

The solutions, though, suggest a general direction: Don't simply ban or eliminate or delete. Talk about stuff — whether formally, when it's presented to the public, or informally at home. And don't assume we're smarter today. As you read this, entertainment is being made that'll be just as problematic to our great-grandchildren.

And involving more voices in the production of today's popular culture — and the selection, curation and characterization of yesterday's — can make sense of this more than dismissing the issue as overreaction or scrubbing the leavings of less-enlightened eras.

That doesn't mean that newly offensive classics can't be entertaining. Many of these things are American favorites for a reason: They resonated with us over many years, and have things to say that remain relevant — and, at times, fun and escapist.

But wherever you come down, to suggest that entertainment — music, movies, TV, a multibillion-dollar industry designed to sell our culture's stories back to us in infinite configurations — is not something to examine sometimes under a more close-up lens seems a bit self-defeating. This, after all, is us — maybe not an inclusive enough "us," maybe not the "us" that many want us to be, but something that demands to be understood.

Let Molly Ringwald have the last word: "Erasing history is a dangerous road when it comes to art — change is essential, but so, too, is remembering the past, in all of its transgression and barbarism, so that we may properly gauge how far we have come, and also how far we still need to go."

Anthony, director of digital innovation for The Associated Press, writes frequently about American culture. Follow him on Twitter at @anthonyted.